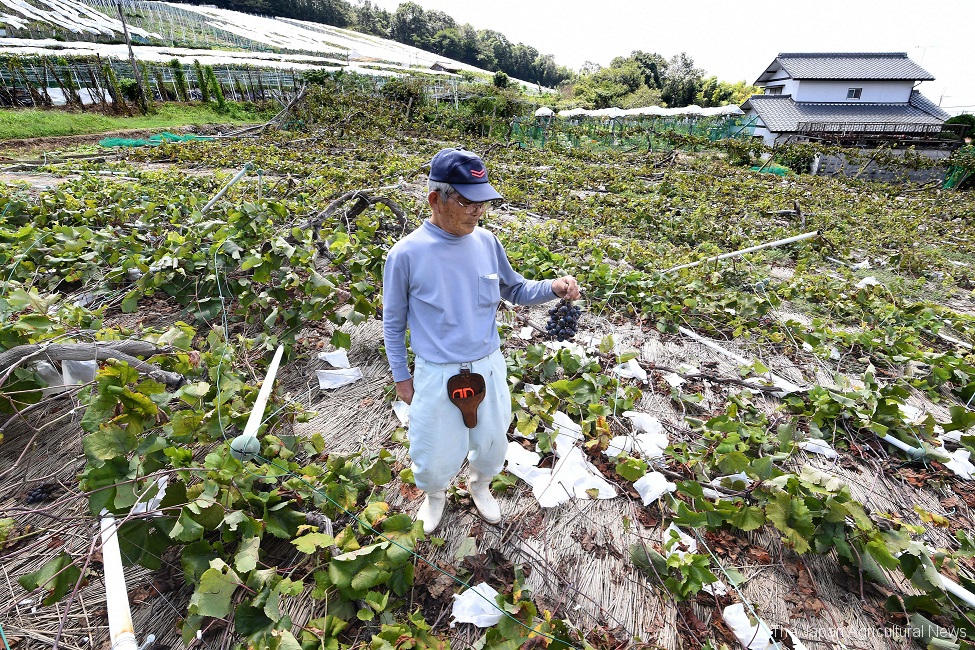 A grape farmer staring at a bunch of grapes he picked up from the ground in his grape yard which was repeatedly hit by the two strong typhoons (in Kobe city, Hyogo Prefecture)

HYOGO, Sep. 6 – Damages on agriculture became clearer on September 5, 2018, a day after Typhoon Jebi passed over the Kansai region of Japan.  The powerful storm brought widespread damages as its extremely high winds knocked down greenhouses, slammed apples, grapes and many other fruits to the ground, and badly damaged fruit vegetables such as eggplants. Due to the blackout, cattle farmers are still having difficulties. It will take longer to get a full picture of the damages.

Jebi landed the city of Kobe in Hyogo Prefecture. At Kande Tourist Grape Farm, the typhoon tore down vinyl coverings and flung some grapes on the ground in 60 to 70 percent of its 1.7-hectare land.  In some area, the storm even knocked down their overhead trellis. Jebi inflicted further damage on the region which was also hit by the previous typhoon named Cimaron.

According to a sub-director of the grape farm, some of the areas in the farm were damaged before they harvested any. “It’ll take over five years to replant the damaged trees and grow them big enough for bearing fruits, but we’ll do whatever we can do to rebuild the farm,” he stressed. They plan to continue offering the fun fruits picking experience mainly for the tourists who have made reservations. A local agricultural cooperative (JA Hyogo Rokko) said that they are still trying to put the whole picture together but there are reports on damages on rice fields and greenhouses in the region. It’s likely that the damages got severer on greenhouses and farmland which have already suffered damaged by Cimaron.

In at least five prefectures, some dairy farmers have not been able to ship raw milk because of the blackout that continued for a long time.