Farmers in Hokkaido hit hard by quake, struggling to recover 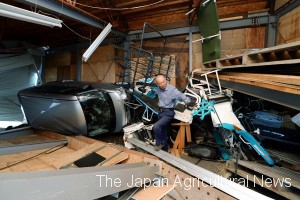 A farmer of Atsuma, Hokkaido, on Sept. 7 looks at his warehouse destroyed by a powerful earthquake which hit the region the day before.

HOKKAIDO, Sept. 8 – An earthquake which rocked Hokkaido, logging the maximum 7 on Japan’s seismic intensity scale in the town of Atsuma, triggered massive landslides that engulfed houses, roads and farming facilities.

Farmers and agricultural cooperative officials, while being shocked by the damages, are trying to clean up the places to resume operation.

A 71-year-old rice farmer, who cultivates Nanatsuboshi and Yumepirika brand rice on a 9-hectare field, had his storehouse destroyed and pushed into the street by a mudslide. Everything in the storehouse, including a mini vehicle he bought last year, a large rice-planting machine and a sowing machine, toppled over.

“I couldn’t believe my eyes when I saw such a heavy thing lying here,” said the man, who was cleaning his house and the farm. “I’m absolutely shocked.” The quake left cracks all over his fields. 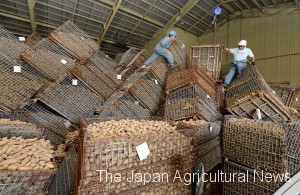 Officials of a local farm cooperative clear up the collapsed containers of potatoes in a storage facility in Atsuma, Hokkaido, on Sept. 7.

On Sept. 7, a day after the quake, officials of the Atsuma branch of local farm coop JA Tomakomai-Kouiki were busy clearing up warehouses where potatoes and wheat grains were stored.

In one of the warehouses for potatoes, some 900 wire mesh containers, each weighing 600 kg, collapsed, and a sorting hopper was buried underneath.

“If the potatoes are not put back in the containers to keep them dry, they might begin to rot,” the farm coop’s official said.

The cooperative receives 60 hectares of potatoes, mainly May Queen brand, which are harvested in the town. Harvesting peaks in the first two weeks of September, but the coop has been unable to accept potato shipments and plans to outsource the sorting process in the worst case scenario.

The coop officials say they hope power and water supply will resume soon so that they can start accepting vegetable shipments.