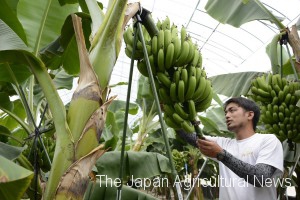 A farmer takes care of bananas in a greenhouse at Kami Banana farm in Minamikyushu, Kagoshima Prefecture.

TOKYO, June 23 – Along with the development of nontropical banana plants that can survive cold weather, banana production is increasing in various parts of Japan, the nation which imports 99 percent of bananas it consumes.

The bananas are cultivated using plants developed by Tomoiki BIO, a seeds and plants manufacturer in Kitakyushu, Fukuoka Prefecture. The new technology involves freezing banana plants’ growing point by decreasing the temperature of a freezer to minus 60 degrees Celsius, then defrosting and cultivating them. The plants that went through this freezing procedure are found to be resistant to cold weather and pests.

Kami Banana, an agricultural corporation in Minamikyushu, Kagoshima Prefecture, built 30 greenhouses on a 2-hectare land to cultivate pesticide-free banana plants. Their products appeal to consumers because of their clear traceability, being sold at a hefty price of 1,000 yen per banana.

Some 4,000 banana trees, each about 5 meters high, line up a meter away from each other inside a greenhouse. About 120 to 200 bananas can be harvested at one time from a plant.

The firm searched for a variety that can be grown in the Honshu region and began cultivation in June last year in Kagoshima, known for warm weather and rich supply of spring water. It shipped its first bananas in March.

The bananas are ripened at the firm’s facility for about a week after harvest. The firm ships about 2,000 bananas a week. The bananas became known following local media reports, and those who want to purchase them online have to wait for a month. The bananas are sold online at 877 yen, and purchase orders can be made from five bananas. Plants are sold at 30,000 yen a seedling, but orders should be made for at least 100.

A farm in Higashihiroshima, Hiroshima Prefecture, began producing bananas last year. At a sales campaign held in May at Sogo department store in the city of Hiroshima, the farm sold out 450 bananas in two days. It plans to sell the bananas at a farmers’ market of a local farm coop JA Hiroshima Chuo, aiming to ship some 10 tons a year.

The farm grows bananas in two greenhouses, about 7 meters high, totaling 23 ares in area. It planted 500 seedlings in June last year and ships the fruits after ripening them at its facility. Its bananas reach more than 20 degrees Brix in sugar content, with rich fragrance and creamy taste.

After the banana production business gets on the right track, the farm plans to open a tourism farm to help revitalize the community.