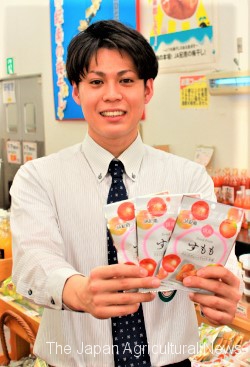 WAKAYAMA, May 1 – Aki Okazaki, 25, who works at an agricultural cooperative in Wakayama Prefecture, won an online contest participated by male employees from 30 confectionery makers nationwide promoting snacks of their companies.

“I am honored,” Okazaki said. “I would like to make use of this achievement to promote sales of local specialties.”

The contest, organized by confectionery firm Yamaboshiya Co., Ltd., solicited votes online between late March and mid-April and announced the results on April 23. It received 15,325 votes.

“To be honest, I was quite surprised by the result because there were many contestants from major companies,” Okazaki said. “I appreciate the support by the coop’s members and staff, as well as by the people of the local community.”

JA Kinan began the business of manufacturing and selling dried fruits in 2017 as part of efforts to increase farmers’ income.

It started selling dried products of Nanko-ume Japanese apricots, Hassaku oranges and Kiyomi oranges in 2018. In April, Japanese plums, Unshu mikan tangerines and lemons were added to its lineup of dried fruits.

Okazaki, who is in charge of promoting JA Kinan’s processed items including dried fruits and “umeboshi” pickled Japanese apricots, said: “I hope being the winner of the contest will be appealing to my clients.”