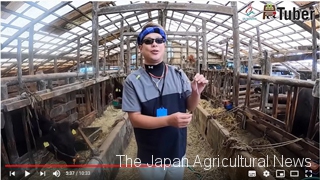 Fujiyama in his video on NohTube channel

TOKYO, Feb. 16 – A YouTube channel of the Youth Group of the Japan Agricultural Cooperatives (JA Group) welcomed six new members. The NohTube channel, it’s called, is now run by 12 “NohTubers” and posts four videos per month instead of two in 2020. (Noh means farming in Japanese.) As of February 15, 2021, it has 33 movies, some receiving more than 40,000 views.

His takes include how he inseminates cows and sells them at an auction, something unfamiliar to consumers. More and more consumers today don’t know the process before they buy packaged meat at supermarkets. So, he started from a straw filled with semen to explain how domestic animal inseminators, breeders, and growers play their roles in the entire cow production system.

Another NohTuber is a 34-year-old fruit grower, Toru Mitsui. He grows apples, prunes, and peaches at his 2-nectar field in Nakano, Nagano Prefecture, and calls himself a young farmer warrior. Also, he chairs the Youth Group Association of a local agricultural cooperative in Nagano Prefecture (JA Nagano).

Mitsui’s videos are about his work at the farm and the activities of the All-Japan JA Youth Groups Association and the JA Nagano Youth Group Association. In his videos, he introduces how young farmers are working hard on agriculture and regional revitalization.

They keep the contents relaxed and informal, but they also show their political involvement, such as lobbying, and explain the tough side of being a farmer. “We want to change the reality,” one said in a serious tone.