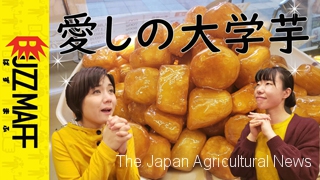 TOKYO, January 14 – A year has passed since the YouTubers from Japan’s farm ministry made their first official post on their official YouTube channel, Buzz Maff. Since its launch, the Ministry of Agriculture, Forestry and Fisheries of Japan posted one video each day about anything and everything about agriculture to gain attention. As a result, the channel garnered more than 6.1 million views in the first year to prompt many people, including the younger audience who usually have low interest in agriculture, to come and see what they have to say.

One of the official YouTubers from the ministry talks only about the charms of sweet potatoes. Another sings rap music to explain square rules and systems casually. Another creates animation films on agriculture all by oneself. The ministry launched Buzz Maff on January 7, 2020, to open its gate to the public and attract attention of a wider audience. The government officials did all the planning, filming, and editing and created 364 out-of-box videos in one year.

The videos made by nation’s first bureaucratic YouTubers created a buzz among people. One video asking people to buy more flowers to help the growers suffering from poor sales due to the Covid-19 pandemic has been viewed 860,000 times in total and increased the demand for flowers. The ministry has another official channel, which started in 2008. It shows the videos mainly of press conferences and earns approximately 1.3 million views on a yearly average, far below the views gained by Buzz Maff.

Buzz Maff currently has more than 58,000 subscribers. It aims at boosting the number to 100,000 while collaborating more with local governments all over the country to launch joint promotional activities. “Buzz Maff can deliver our messages about the policies and schemes to the people who usually live at a distance from us,” an official from the Public Relations and Policy Evaluation Division of the ministry said.