“Add Noh Cards to your collection!” Young Japanese farmers get over 70 together to create new buzz with new trading cards 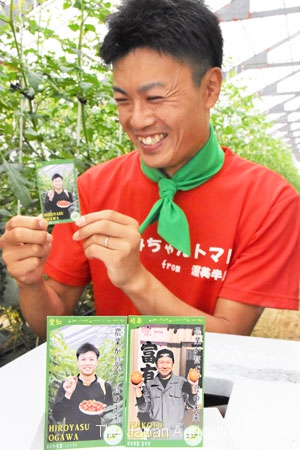 AICHI, Oct. 16 – New series of collectible cards featuring farmers are drawing consumers’ attention in Japan. The card called “Noh Card (Farmers Card)” proposed by three young farmers is a business card-sized card with a picture of farmers and information on their proud products. Consumers can have fun collecting them like other trading cards, and that encourages them to buy more agricultural products from more than 70 farmers who currently participate in the project. One of the proposers, Hiroyasu Ogawa is a 30-year-old grape tomato grower in Tahara City, Aichi Prefecture. He hopes that the initiative can bring consumers and farmers closer together and build a positive image of farming. 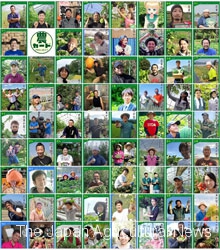 Farmers from all over the country from Kyushu to Hokkaido participate in the project.

Ogawa used to sell 90% of his grape tomatoes in the market. When he was looking for an idea for boosting the sales from direct marketing, he heard of a “Ryoshi Card (Fishers Card)” project in Aomori Prefecture, which began to raise the attention to the fishery industry. “Wow!” he thought and tweeted in mid-August that he also wants to create farmers’ collectible cards. A persimmon grower in Gifu Prefecture and a grape tomato producer in Hokkaido, both in their 30s, supported the idea and joined Ogawa in launching the project. The card design was completed the day after the posting, and he started recruiting participants in August. In only ten days, he had 71 farmers from Hokkaido to Kyushu answered that they wanted to join the project. An Aomori-based printing company has also raised a hand to support the project.

Media responded quickly. Programs featuring the project were aired on TV and radio while some articles were put on newspapers mainly in the Tokai central Japan area. Currently, many people are leaving their posts with a hashtag “#農カード (#nohcard).”

“We receive great feedback, and we are having fun with this project,” Ogawa said. The project has now grown to have its website and an SNS account.