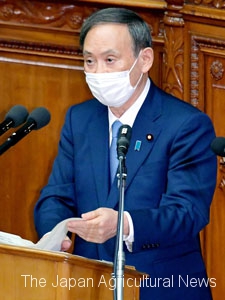 TOKYO, Oct. 27 – Prime Minister Yoshihide Suga made his first policy speech at the Diet on Oct. 26, expressing eagerness to revitalize rural areas and stimulate the Japanese economy by boosting tourism and agricultural reform.

In order to increase income and inflow of people in regional areas, he said he will continue promoting exports of agricultural products and reforming the farm sector, the policies which he had been focusing on as chief cabinet secretary. But he failed to offer new policies regarding agriculture.

In his speech given at the extraordinary Diet session which was convened on the day, Suga reiterated the fact that he was born in a farm in Akita Prefecture and stressed his determination to build vibrant rural communities, the stance he has maintained ever since he ran for the Liberal Democratic Party’s presidential election in September.

Regarding exports of farm produce, he said the value of exports can increase further, noting that the exports are recovering even amid the new coronavirus pandemic.

He reaffirmed the government’s plan to come up with a strategy by the end of this year to achieve its goal of raising farm exports to 5 trillion yen by 2030 and swiftly put it into practice.

He also said the government will continue working on reforming the agriculture, forestry and fisheries sector to bring about growth in rural economy.

He stressed again that he will do his best to push ahead with regulatory reforms, breaking down the vertically segmented administrative system and getting rid of vested interests and precedentism.

But while Suga called for a drastic cut in mobile phone fees and digitization of administrative procedures, he did not touch on specific issues regarding the agricultural sector.

As for trade negotiations, he said his administration will maintain and strengthen the multilateral free trade system and will sign an economic partnership agreement with Britain.