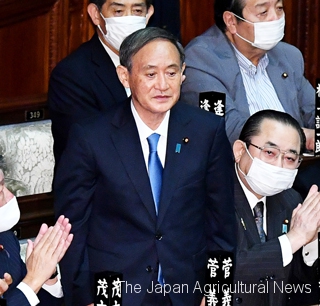 Yoshihide Suga stands up after being elected the new prime minister at the Upper House on Sept. 16.

Suga’s cabinet was officially launched after a ceremonial endorsement by Emperor Naruhito at the Imperial Palace.

Kotaro Nogami, 53, former deputy chief cabinet secretary, was picked as the new agriculture minister, the first time for him to be appointed to a cabinet post.

While Nogami has no experience serving in major agriculture-related positions in national politics and is an unknown quantity in the field, Suga apparently assigned him to the post, giving Nogami credit for his work supporting him and the administration of former Prime Minister Shinzo Abe as deputy chief cabinet secretary.

Nogami told reporters that Suga instructed him to work on boosting exports of farm produce and accelerating reform in the agriculture, forestry and fisheries sector.

“Born as the eldest son of a farmer in Akita (Prefecture), I constantly have feelings of hope inside me to revive all the rural areas in Japan,” Suga stressed at his inaugural news conference, adding that he will work on further expanding exports of agricultural and food products to help revitalize regional areas.

“I will make utmost efforts to conduct regulatory reform by tearing down bureaucratic sectionalism, vested interests and notorious habit of following precedents,” he added.

Nogami, serving his third term as Upper House lawmaker representing Toyama Prefecture, is a member of the LDP’s Hosoda faction, the party’s largest faction which backed Suga in the presidential election.

“The agriculture, forestry and fisheries sector is the foundation of a nation. It is necessary to firmly hand down the beautiful farm, mountain and fishing villages to the next generation,” Nogami said.

He also said the top priority will be given to fighting the COVID-19 outbreak, including measures to cope with declining consumption of farm products and weakening agricultural production brought about by the pandemic.

Other challenging tasks facing the new farm minister include how to cope with this year’s rice yields which is feared to lead to a supply glut and how to realize the government’s basic plan for food, agriculture and rural areas.

Suga has been leading efforts to boost exports of farm produce as a key to revitalize rural areas, and whether exports can help increase farmers’ income will also become an important issue.

He had served as parliamentary vice-minister of finance, head of the Upper House’s committee on education, culture and science and state minister of land, infrastructure, transport and tourism.

As his grandfather had served as head of an agricultural cooperative and his constituency, Toyama Prefecture, is a major rice growing region, Nogami has been involved in agricultural policy since his days as a member of the prefectural assembly.

Former farm minister Taku Eto describes Nogami as “quiet, but a person with a fierce fighting spirit.” Even after media reported of his appointment as farm minister, Nogami remained cautious about responding to reporters, saying he would comment after he is formally asked to take up the job.

Nogami, 181-cm tall, played basketball from junior high school to college, and participated in national high school competitions for two years while he was a student at Toyama High School. He was also a captain of the high school’s basketball team.

Aside from playing basketball, he likes reading books. His favorite is trout sushi, local specialty of Toyama. He has two daughters and a son. His motto is “one has to draw the line somewhere.” As a member of the Hosoda faction, he is seen as one of the promising politicians in the Upper House.