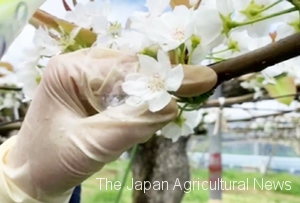 A soap bubble landed on a pear flower. (Photo provided by the Japan Advanced Institute of Science and Technology)

ISHIKAWA, Jul. 19 – Soap bubbles may be an effective replacement for bees in the future. A group of researchers of the Japan Advanced Institute of Science and Technology (JAIST) has recently succeeded in pollinating fruit flowers by spraying soap bubbles containing pollen. They’re now trying to see if a drone equipped with a bubble sprayer can autonomously move around a fruit orchard and pollinate flowers.

The decline in the number of honeybees and other pollinators is a common problem among the world’s fruit growers. The farmers can pollinate their trees by hand using feather brushes, but the time and labor required for the job are growing as the farmers get older and decrease in number.

The researchers first tested the use of a toy drone for pollinating flowers. They glued horsehairs to the drone, expecting that they would pick up pollen and pollinate flowers. The result was, they did pollinate the flowers but damaged some at the same time. They then met with soap bubbles and thought the bubbles could do the same job without damaging flowers.

So, the scientists created the best bubble solution by adding calcium to make pollen work more effectively and other substances to make bubbles stronger. Then, they added pollen to the solution and spray it onto flowers in a peach orchard. The result was as good as pollinating by hand, and 95% of the flowers turned to bear fruits. Also, in this experiment, the scientists confirmed that only two or three bubbles are required to pollinate one flower effectively. The flowers pollinated by soap bubbles grew as quickly as those pollinated manually.

One of their future goals is developing a drone with a bubble sprayer. To make such a high-tech pollinator, they may need to apply image recognition technology for accurately spotting flowers and skills for precisely spraying the solution onto them. “It will help us solve one of the common problems of farmers on the globe, which sees a decline in the number of bees and other insects and a need to save labor,” a member of the research group stressed.