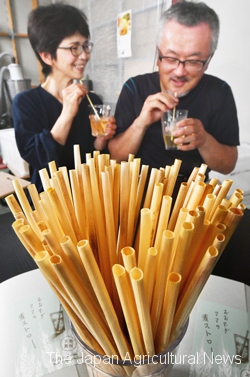 A current plastic straw for drinking is named after a straw as an agricultural byproduct. The new straws for drinking are made of natural materials. (in Fukui Town, Fukui Prefecture)

FUKUI, May 31 – Straws made of barley stalks are attracting attention as a new option for eco-friendly consumers. Fukui Oomugi Club, a Fukui-based barley tea and food producer started selling them last year. It uses stalks provided by local barley growers to make the very natural straw, which is unique to Fukui Prefecture, which is Japan’s largest producer of six-row barley, or Rokujo oomugi in Japanese. Making straws out of agricultural byproducts can also help reduce plastic waste.

The stalks of “Fiber-snow” six-row barley are provided by the members of a local agricultural cooperative corporation named Ten. They are dried in the sun, cut in 18 to 20 centimeters in length with scissors, and sterilized. They come in various diameters, from 3 to 6 millimeters, and that’s making this product even more unique.

The company commercialized it in response to the request by consumers. Last year, it sold out all 50,000 straws it made, so the company plans to produce 500,000 this year. The harvesting season starts in the latter half of May. “(These straws) will return to the soil after the use,” said Hiromi Shigehisa, the 55-year-old president of the company. “They’ll remind you of a beautiful golden wheat field,” he continued confidently. The price for a pack of ten straws is 330 yen.