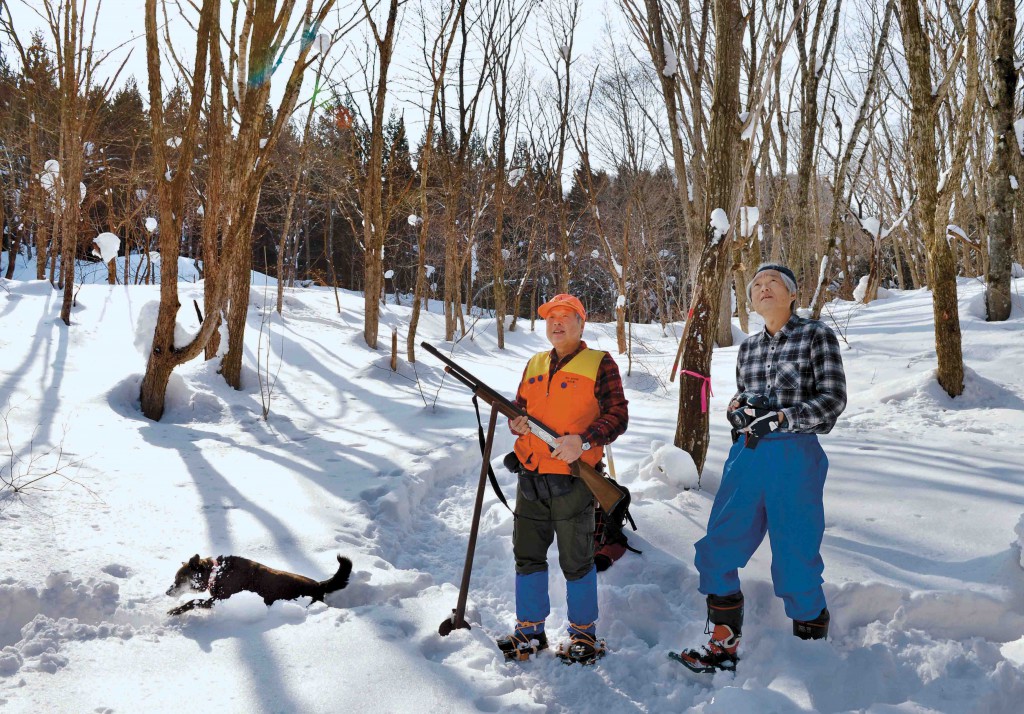 Suzuki (left) walking around the mountain holding a shotgun and accompanied by Tanaka (right) and Suzuki’s dog. (in Kitaakita-shi, Akita Prefecture)

Matagi is a traditional hunter mainly in northeastern Japan, who hunts bears, rabbits, ducks and other mountain animals strictly following traditional rules and styles passed on for generations. Today, no Matagi is a full-time hunter any more, but the Matagi tradition is alive even today owing to a small number of old Matagi hunters who engage in agriculture or forestry when the mountains are closed to hunters.

Traditional tools used by Matagi include a hand-forged bear hunting knife called Fukuronagasa (second from the left) and a scale to weight bear’s gallbladder called Monmebakari (fifth from the left).

The Matagi are aging and there is a concern over the lack of successors. But the heritage itself has now gain new support from folks from the outside world. They are fascinated by the culture of Matagi and have come forward to start communicating the attractiveness of the Matagi culture to the outside world and helping the preservation of the tradition. 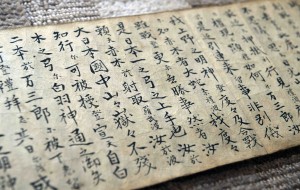 Old hand scroll passed down for generations at Suzuki Family has stories on Matagi. It’s regarded as a proof of a permission for the family to work as Matagi.

Hideo Suzuki, 68, is one of 35 Matagi in Ani district in Kitaakita-shi, Akita Prefecture, which is a village known as “Home of Matagi”. Being the 9th-generation descendant of a native Matagi family, he joined one Matagi group at the age of 15, following his grand father who was already in the group. “I go hunting when I have nothing to do on the farm and return to the farm when the hunting season is over. The two jobs fit in perfectly.” 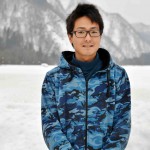 Suzuki places an enormous amount of trust in one photographer, Yasuhiro Tanaka, as a man “who can show the real picture of the Matagi to the world.” Based on the 30-year-long relationships with the Matagi in Akita Prefecture, the 57-year-old photographer has already published seven books on Matagi and Matagi culture. His most recent book “Sankai” which collects mysterious stories told by the mountain folks sold more than 80,000 copies.

Nozomi Kimura, 21, from Tokyo University of Agriculture came to Ani from his keen interest in Matagi. The young student has become keenly aware of the seriousness of wild bird and animal damage to the agricultural products when he was on a practical training at a farm village. It sparked his interest in Matagi. In April last year, Kimura took a year off from the university to live in Ani and learn the Matagi culture under Suzuki.

Kimura is now determined to return to Ani to start his new life as a new farmer after he graduates. “In the future, I also want to open a guest house in Ani to bring more people to the Home of Matagi,” he said.