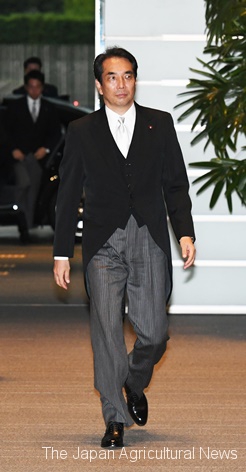 TOKYO, Sep. 12 – The fourth Abe Cabinet was formed on November 11. It appointed Taku Eto as the Minister of Agriculture, Forestry and Fisheries. Eto, a first-time minister, used to be an assistant to the prime minister Shinzo Abe. He is an expert of an agriculture and forestry policy in LDP. Abe intends to strengthen efforts to address Japan-US trade agreement, swine fever and all other urgent agricultural issues and drive the reform of agricultural policy with the appointment of his close aide. Eto indicated that he would consider reviewing the outline of the policy regarding the Trans-Pacific Partnership Agreement (TPP), taking into account the Japan-US trade agreement.

At a press conference, Abe told the press that Eto knows everything about agricultural policy. He voiced expectations for Eto as a person with a worldwide perspective and front-line experience. Eto should “carve out a path to a new era of agriculture, forestry and fishery industry so that young farmers can look forward to the future,” the prime minister said.

“It’s important to keep the production base and to secure young farmers for the future of the agriculture,” Eto said at the press conference at the prime minister’s office. As a scheme to secure the production base, he mentioned the enhancement of the subsidies for maintaining the multi-functionality of the agricultural industry. He also said that Abe asked him to work hard on the improvement of food self-sufficiency rate and capacity.

He sees the Japan-US trade agreement is currently “within the scope of the economic partnership in the past.”

Later, on the same day, the new agricultural minister emphasized in an interview with Japan Agricultural News that he’ll keep close eyes on the progress of the agricultural trade to make sure that it will not go beyond the level of the economic partnership agreements in the past.

Agri geek to back Abe

Taku Eto is born in Kadogawa, Miyazaki Prefecture, in 1960. The 59-year old politician is a son of Takami Eto, who was also a central political figure of agricultural policy in LDP. Like his father, he joined the Cabinet for the first time in his sixth term. He is an agricultural geek who calls himself “a professional of nothing but agriculture and forestry” and “a mountain monkey from Miyazaki.” He is close to Abe. He is put to the test as a new agricultural minister, the position that his father never experienced.

He loves to fish and enjoys surfing. On his first entry to the Cabinet, he said, “My father died 13 years ago. I’m still far behind him, but I’m glad that I can tell him what I am up to when I visit his grave this year,” he said. Eto lives with his wife and three sons. He is an unaffiliated member of LDP.