Japan’s new “Sugoi” apple: size is not so big, but tastes great 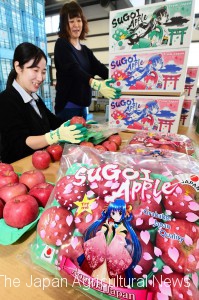 The regional farmers cooperatives in Aomori, including the JA Tsugaru Mirai, have reduced prices of Japanese apples by exporting smaller-sized “Sugoi” apples.

Typically, the size of Japanese apples is big, but Aomori apple growers started selling smaller-sized one so the prices is lower, allowing them to tap into new markets in Southeast Asia.

The growers named it Sugoi apple, because it tastes great, even though it may not be as big as Fuji apple.

The farmers’ groups also have made a special portable package, which has a portrayal of Japanese animation and enables to contain 10 pieces of Sugoi apples.