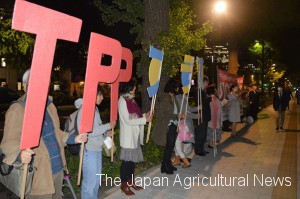 TOKYO, Nov. 7 – Two days before the meeting of the leaders of Trans Pacific Partnership (TPP) member countries in Danang, Vietnam, a group of protestors including those involved in consumers’ cooperative societies and the agricultural industry gathered in front of the House of Councillors’ Office Building in Tokyo, Japan, to protest against the government’s stance on the TPP free trade deal. The protestors strongly criticized that the government is trying to reach a broad agreement at the TPP talks, scheduled on November 9, 2017, without explaining the nation the progress of the discussions and the contents of the deal. “The government is ignoring people’s concerns over the deal. We’ll never accept the agreement made without our consent,” the protesters said.

There were around 50 protestors involved in the demonstration. “The government is withholding the key facts,” one said. “Don’t leave Japanese farmers behind while they are making great efforts to improve the country’s food self-sufficiency ratio,” said another.

This entry was posted in Farm Policy, Trade Talks. Bookmark the permalink.