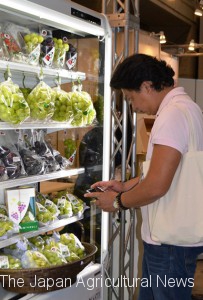 2. A foreign buyer takes a picture of Shine Muscat grapes at “Japan’s Food” export fair held in the city of Chiba.

TOKYO, Nov. 2 – Growers of Shine Muscat grapes are recently enjoying brisk business, backed by the overwhelming popularity of the variety known for its sweet and aromatic taste and large, seedless berries that can be eaten without peeling. After the variety was registered in 2006, its cultivation quickly spread nationwide to become the leading breed.

It is also gaining popularity in overseas markets, prompting foreign buyers to contact growers to do business with them directly. Because the variety has long shelf-life, it can be shipped through winter even after the production peak is over, helping to boost farmers’ profits.

At “Japan’s Food” export fair held in the city of Chiba in October, the tasting booth was crowded with foreign buyers, many of them aiming at Shine Muscat grapes from Okayama and Nagano prefectures.

A Russian buyer said the grapes would be good to serve for dessert at high-class sushi restaurants in Russia, adding that other grape varieties seem sour after tasting Shine Muscat. Visitors kept coming to the booth throughout the day to taste the grapes. 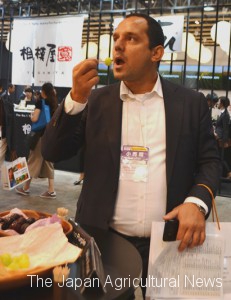 A British buyer eats a Shine Muscat grape at “Japan’s Food” export fair in the city of Chiba.

Encouraged by the variety’s big hit, grape growing regions are expanding production of Shine Muscat. According to JA Fruits Yamanashi, an agricultural cooperative in Yamanashi Prefecture which is the major production area of the grapes, both production and unit prices are increasing by 20 percent every year. Shipments of the fruit collected and sorted by the farm coop this year totaled some 1300 tons as of Oct. 21, up 30 percent from the same period last year. Although the shipments increased, the unit price per kg rose about 200 yen from a year before. A coop official said many local growers of other grape varieties are shifting to production of Shine Muscat because it is more profitable.

The farm coop was highly credited with realizing high-quality production of the grapes, focusing on providing good flavor and large berries, each weighing 20 grams. The grapes are shipped to the market and the coop does not trade directly with foreign buyers, but coop officials said they receive offers from abroad to purchase thousands of bunches of the grape which is always in short supply.

In Nagano Prefecture which is also a major production area of Shine Muscat, the berries are relatively small this year due to the low temperature, long rain and insufficient sunlight in August. But according to a local agricultural cooperative JA Nagano, the prices are higher than last year, marking “unexpectedly high levels.” “Shine Muscat is doing well, attracting nationwide attention, and we are also receiving export inquiries,” a coop official said.

Shine Muscat was developed by the National Agriculture and Food Research Organization and was registered in 2006. According to the Agriculture, Forestry and Fisheries Ministry, the total acreage was about 680 hectares in 2014, increasing more than fourfold compared with five years before.

In recent years, new technologies are being developed to extend the harvesting season and the shelf-life of Shine Muscat to continue its shipments even after the season peaks in October and respond to increasing market needs for the fruit in winter as gifts.

The farm ministry says exports of Japan-grown grapes including Shine Muscat are growing sharply in terms of value, with Hong Kong and Taiwan being the main importers. The exports totaled roughly 2.3 billion yen in 2016, expanding by about five times from 2012. In terms of volume, the exports topped 1,000 tons, about three times more than the amount shipped in 2012.

This entry was posted in Food & Agriculture. Bookmark the permalink.