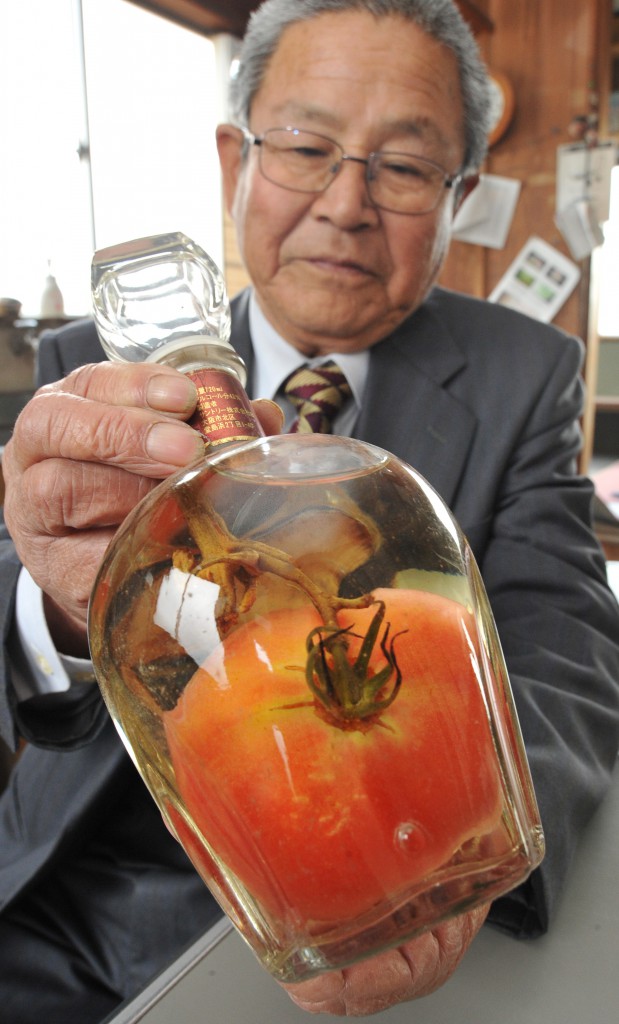 Growing a big red tomato in a bottle. That’s what this 72-year-old gentleman in Omihachiman-shi, Shiga Prefecture, does it as a hobby.

Hitoshi Watanabe, who is actually a vegetable farmer, uses clear empty whiskey bottles of approximately 25 centimeters tall. He puts one young tomato in a bottle when it’s small enough to fit in the 3-centimeter mouth of the bottle, carefully not to drop the tomato off the branch. Then he takes care of it, always making sure that the bottle is tightly fixed and untouched as much as possible. When the tomato gets big, he cuts it off the branch and fills the bottle with saki to preserve the tomatoes for a long time. 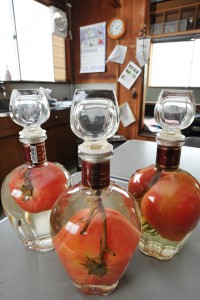 Watanabe started growing tomatoes in the bottles just for fun approximately 30 years ago. Then he stopped doing so for a while, until his friend said four years ago that he should restart it. This winter, he grew two “Momotaro Grande” tomatoes and two “Fight” tomatoes in four bottles. He put these four tomatoes in the middle of September and it took almost three months to grow them.

He gives away the bottled tomatoes to his friends when they come and visit his farm. “It’s very hard to keep the tomatoes growing in the bottles as they may come off the branch easily. Next year, I plan to grow grape tomatoes in a bottle, too” he said.

This entry was posted in Food & Agriculture, Others, Photos and tagged News. Bookmark the permalink.