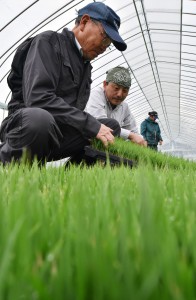 Shusaku Watanabe (left) checks young rice plants to be cultivated for feed at a greenhouse in Odate, Akita Prefecture. He says rice farmers in the region have grave concerns over the ongoing Trans-Pacific Partnership free-trade talks.

Amid reports that Japan and the United States are considering expanding Japan’s import quota for U.S. rice in the Trans-Pacific Partnership free-trade talks, Japanese farmers in rice growing regions are voicing worries and anger, saying that increased imports would ruin their efforts to balance domestic supply and demand by reducing production of table rice and shifting to production of rice for livestock feed.

“Don’t they care if the government’s policy to tighten supply-demand balance of rice ends up in failure?” says Shusaku Watanabe, 78, who heads Oshigenai, an agricultural producers’ co-operative corporation in the city of Odate, Akita Prefecture. Hit by dropping rice prices, Oshigenai went into the red in the 2014 business year for the first time in the five years after it became a corporation.

As more farmers in the Oshigenai district are giving up farming due to aging, the corporation manages 37 hectares, or 70 percent, of rice paddies in the district. Because the corporation’s business affects the sustainability of the district’s agriculture as a whole, the corporation decided to expand production of rice for feed by 3 hectares in 2015 to 9 hectares. Then came the proposal to expand U.S.’s Japan-bound rice exports. Media reports say the U.S. is urging Japan to expand its imports of U.S. rice including table rice by more than 200,000 tons per year and Japan is seeking a compromise.

Such a request by the U.S. is totally unacceptable for Japanese rice farmers. If rice imports increased even by around 50,000 tons, rice prices would decline further. It would become difficult for farmers to reconstruct their business or nurture successors. “In order to protect our farmlands, we cannot possibly accept an increase in imports of U.S. rice,” Watanabe stresses.

JA Akita Kita, an agricultural co-op in Odate, has been holding lectures on the government’s new rice policy which focuses on shifting crops to rice for feed in an effort to cut excessive supply of table rice. As a result, rice farmers, especially large-scale farms, increased acreage of rice for feed, with the total amount expected to reach some 470 hectares in 2015, 3.6 times more than in 2014.

Along with the expected increase in production, the co-op plans to build a second warehouse to stock rice for feed before the harvesting season in autumn. Such efforts by rice growing regions will come to nothing if imports of U.S.-grown rice increases and supply-demand balance tightens.

Producers of Hinai-Jidori brand chicken, also based in Akita, are concerned as well. They started to feed their chickens rice in 2009, encouraging production of rice for feed in the area while adding value to their products. If more rice farmers give up their business, chicken producers might not be able to gain sufficient supply of feed produced in the region.

Depending on imported feed, whose prices fluctuate violently, would be too much of a risk for poultry farmers. JA officials say the TPP talks could deal a severe blow not only to rice farmers but also to the region as a whole.