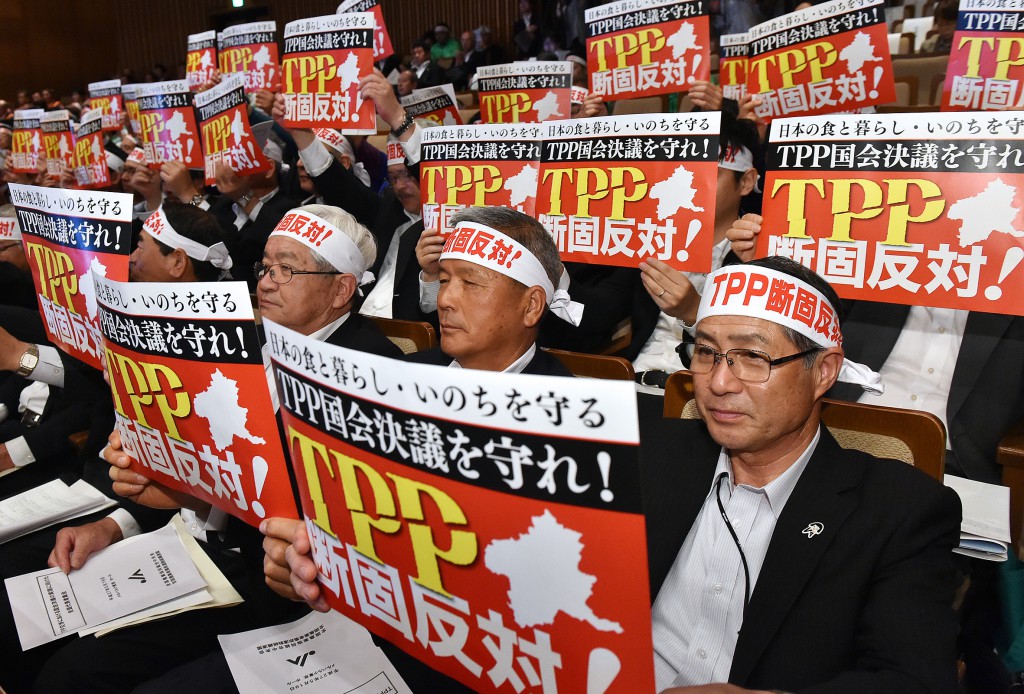 Representatives of the agricultural sector hold up posters calling on the government to protect farm products in the TPP talks at a rally held on Tuesday, May 19, in Tokyo’s Minato Ward.

Some 1,500 people in the agriculture sector gathered from across the nation on Tuesday, May 19, in Tokyo to call on the government to protect sensitive farm items ahead of the ministerial meeting of the Trans-Pacific Partnership free-trade talks expected later in the month. The Central Union of Agricultural Co-operatives (JA-Zenchu) and a national political organization of farmers which hosted the rally invited ruling parties’ lawmakers and urged them to keep the Diet resolutions which pledged to protect key agricultural products such as rice and beef from tariff elimination.

The United States Senate began deliberating the Trade Promotion Authority (TPA) bill, which would give the White House more authority to negotiate the deal under the TPP scheme, and the bill is highly likely to be passed later this week. Although the bill is expected to face a rockier road to passage in the House of Representatives, TPP member nations are seeking to hold a ministerial meeting sometime around May 26 to move the negotiations forward.

“The Diet resolutions are a lifeline to protect food and our lives,” JA-Zenchu President Akira Banzai stressed at the meeting, expressing determination to continue campaigning to realize the resolutions. The government maintains that the prospects of the negotiations depend on whether the TPA bill is passed in U.S. Congress, but JA-Zenchu Vice President Toru Nakaya urged the government to stick to a resolute negotiating stance and work to keep the pledge without setting deadlines. Nakaya also said a gap exists between Japan and the United States on the level of information disclosure regarding the negotiations and asked the government to step up measures to improve transparency of the talks.

Hiroshi Moriyama, head of the ruling Liberal Democratic Party’s committee on the TPP talks, warned if the TPA bill is passed in Congress, there will be a much higher possibility of the TPP members rushing into a broad deal. “There is no change in our stance of keeping the Diet resolutions,” Moriyama said at the rally. “The government and the ruling bloc will work together to make the utmost effort to protect the nation’s agriculture, forestry and fisheries industry and maintain its sustainability.”

Noritoshi Ishida, who heads the agriculture, forestry and fisheries division of Komeito, the LDP’s coalition partner, said the government must obtain in the TPP negotiations what is pledged in the Diet resolutions. He also touched on the need to disclose information on the negotiations.