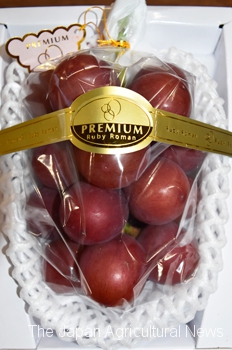 ISHIKAWA, Aug. 19 – The Ishikawa Prefectural Government said that Ruby Roman, a high-grade grape variety grown exclusively in the prefecture, has been registered as a trademark in South Korea in 2019 and 2020 by an unidentified person.

Application for a variety registration in South Korea, which could have been taken as a countermeasure, is no longer possible because the period for filing the application overseas for the variety has expired, leaving growers with no options.

The prefectural government is aiming to take stronger measures to prevent illicit outflow of seeds and saplings from the country or overseas distribution of products using the name Ruby Roman, making use of the revised seed and seedling protection law that took effect this spring.

According to the Ishikawa government, Ruby Roman was registered as a trademark in South Korea in English in 2019 and in katakana and in Hangul in 2020.

“It appears that the trademark right is held by a South Korean individual, but the details are unknown,” said an official of the prefectural government’s brand strategy promotion division.

In September last year, the agriculture ministry announced that it confirmed seeds and seedlings named under 36 varieties registered in Japan, including those of grapes and strawberries, are sold online in China and South Korea.

Ruby Roman was not included in the ministry’s list, but the Ishikawa government independently looked through the list of trademarks in South Korea and confirmed the registration.

The grape variety was created in Ishikawa after 14 years of development. It debuted in the market in 2008 after being registered as a new variety in March 2007.

In the first auction of this year’s season in July, a bunch of Ruby Roman grapes fetched 1.4 million yen, setting a new record high. A supermarket chain in Taiwan bought the grapes.

The variety is subject to export restriction under the revised law which came into force in April. Even before that, the prefectural government has been taking measures to prevent the outflow from the prefecture by banning transfers and sales of saplings.

But the prefectural government has not filed an application to register Ruby Roman as a trademark except in Japan, since officials were not sure at first whether the grapes would be accepted in overseas markets.

One countermeasure is to file an application for variety registration in other countries, but under the rules set by the International Union for the Protection of New Varieties of Plants (UPOV), the period allowing filing of application of Ruby Roman overseas has expired.

The Ishikawa government officials said they don’t intend to export Ruby Roman to South Korea or China, adding that they will take necessary measures in other areas such as Taiwan, Hong Kong and Singapore.

Regarding Ruby Roman, there were also reports recently that grapes with the same name had been sold in South Korea.

“We will take measures based on the law to protect the prefecture’s Ruby Roman,” said a prefectural government official.