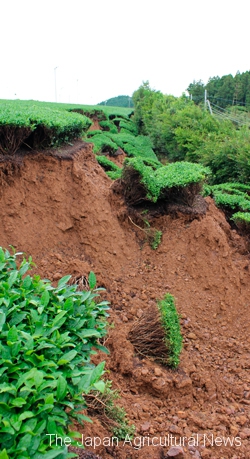 SAGA, Aug.19 – The heavy rain on Japan’s third-largest island started on August 11 and continued for a week by August 18. The deluge of an unprecedented level for this time of the year is causing devastating damage to the tea and other agricultural production in Kyushu. The rainfall continues on and off, making it hard to grasp the whole picture of the damage.

In Ureshino City, Saga Prefecture, the total rainfall for the week (from August 11 to August 18, 9 p.m.) reached 1,171 millimeters. As of August 18, the city confirmed damages at 58 local tea gardens, including landslides and collapsed anti-frost wind machines. At two tea gardens in Shimojuku, large-scale landslides destroyed the whole section of their stepped tea gardens.

The rainfall keeps going on and off on August 18, and “the rain may be continuing to cause more cracks and landslides in the region, but it’s difficult to grasp the whole picture due to the rainfall.”
In Iwayagawachi, Ureshino City, the heavy rain washed down almost 1,000 square meters of the tea plantation run by Shinichi Mine and 8-meter-high stone walls built to protect the field. The damage was caused probably by the loosening of the ground due to the heavy moisture. It’ll take several years to rebuild the garden and a few more years to restart the production. “I became a farmer 19 years ago and created this garden from scratch, so I have a strong feeling attached to it. It endured heavy rains in the past, so I thought it could get over again. There are some cracks in the lots with no landslides, and I’m not sure how much it’ll cost to restore the garden,” the man said.

An official from a local agricultural cooperative (JA Saga) said, “this region has endured territorial rainfalls in 2019 and 2020, and this is the largest damage ever for this community. I still can’t grasp the whole picture.”