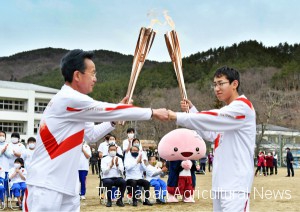 Ryoji Sakuma (right) receiving the Olympic frame at a “torch kiss” point and fist-bumping the previous torchbearer (left). His running course was in Katsurao Primary School, which is the old school for Ryoji, his father, and his grandfather. (in Katsurao Village, Fukushima Prefecture)

FUKUSHIMA, Apr. 5 – The boy began his run in the schoolyard in Abukuma Highlands in Fukushima Prefecture, Japan. Holding the torch aloft, he placed his feet firmly on the ground. Due to the Covid-19 outbreak, the Tokyo 2020 Olympics and Paralympics have been postponed for one year. The torch relay for the peaceful festivities, which is billed as the “Recovery Olympics” by Japan, set off on March 25 at the J-Village sports complex in the prefecture struck by the 2011 earthquakes and nuclear crisis. The 16-year-old boy, Ryoji Sakuma, was the third torchbearer in the seventh section on the first day in Katsurao Village. He ran a lap of the schoolyard slowly and smilingly.

There is a ranch of about four hectares on a hill in Katsurao Village. It’s the Sakuma Farm which raises about 180 dairy cattle, including calves. The 45-year-old dairy farm is run by the third-generation owner, Tetsuji Sakuma, 45. In 2009 and 2010, he shipped the largest amount of raw milk among farmers who belong to a local agricultural cooperation in Fukushima Prefecture. However, in March 2011, the successful cattle farm was hit hard by the Great East Japan Earthquake and the Fukushima No. 1 Nuclear Power Plant accident.

Right after the meltdown, everyone in the village was ordered to evacuate. Tetsuji and his family left the farm and cows with the utmost reluctance and started the life as evacuees. Later, he decided to let his family move into Gunma Prefecture and stay in Fukushima alone to protect his animals. Back then, he said, he felt helpless when he saw some cows dying from lack of feed and water. In addition, he was ordered to ship 95 cows off to be culled for their meat and send 25 young cows to a ranch in Hokkaido. “I had no choice but to stand alone in an empty barn and make an excuse to myself, ‘I knew, they are livestock animals after all.'”

However, Tetsuji has a big supporter at home, Ryoji, his eldest son.

“My dream. I’ll be a cattle farmer.” Ryoji, then 13 years old, wrote this during a calligraphy class at school. The resolution was written on five pieces of calligraphy paper, and the father took pictures and put them on a fridge. That fired up his spirit. “If my son is determined to become a cattle farmer, I must keep the ranch,” he thought.

In June 2016, the evacuation order was mostly lifted, so Tetsuji rebuilt his barns. Two years later, his family returned to the village when local schools reopened, and the family of six restarted their life in Fukushima. In autumn the same year, he reopened the farm with eight new dairy cattle. After checking the level of radiation in the cows’ milk, again and again, he began milk shipment in January 2019.

In April last year, his son, Ryoji, entered the Iwase Agricultural High School in Kagamiishi Town, Fukushima Prefecture, to study animal production as a step forward to the goal of becoming a dairy farmer. On weekdays, he lives in a school dormitory, but on weekends, he comes home, gets up at 5 a.m., and takes care of the cows.

“I think agriculture plays the pivotal role in Katsurao Village. Someday, I want people all over the world to drink the milk of the cow I raised,” Ryoji said. Tetsuji smiled at him happily.