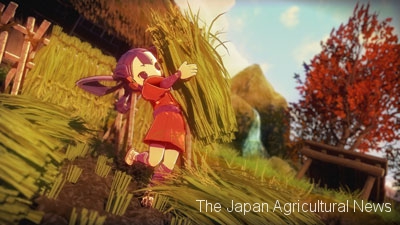 Sakuna: Of Rice and Ruin is an action role-playing game for you to enjoy authentic rice-growing simulation. (Image provided by the Shinmei Group)

TOKYO, Nov. 12 – You are to select good rice seeds, plant them, get rid of weeds, and harvest them – all very skillfully in this brand-new action/simulation game. A Japanese game maker, Marvelous Inc., will release an all-new authentic rice-growing simulation game on November 12, 2020.

Sakuna: Of Rice and Ruin (“Tensui no Sakuna Hime” in Japanese) is an action role-playing game that delivers the story of Princess Sakuna, a harvest goddess exiled to the Isle of Demons (“Hinoe Island” in Japanese) to expunge the beasts controlling the island. Princess Sakuna gets stronger by eating high-quality rice grown by herself. So how to produce high-quality rice is the key to complete the game.

Sakuna: Of Rice and Ruin is available for the Nintendo Switch and PlayStation 4 at 4,980 yen (excluding consumption tax). English versions will become available in late November.

“We want the players to be interested in rice farming,” a creator from the Tokyo-based game developer said.