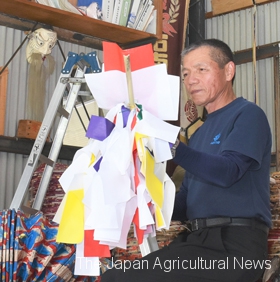 Yoshimitsu Sako at a loss over how to cope with business difficulties (In Hamada City, Shimane Prefecture)

SHIMANE, HIROSHIMA, Aug. 13 – The virus pandemic is throwing a dark shadow over one of the Japanese traditional performing arts, kagura. Kagura is a specific type of Shinto ritual ceremonial dance performed at traditional festivals in Japan. Its purpose is praying for productiveness in farming, driving away evil spirits, and thanking for successful harvesting. But now, many of the kagura troupes are forced to stop practicing and performing due to the COVID-19 pandemic. Some restarted acting in July, but it’s still uncertain for many when they can resume the activities with the second wave hitting the entire country. Some troupes and costume makers see large income drops and difficulties surviving. 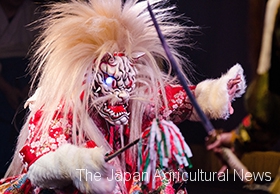 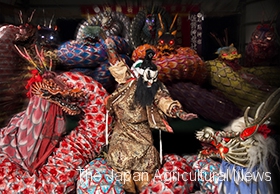 “Iwami Kagura” is kagura specific to the western part of Shimane Prefecture. It was inherited from Shinto priests to locals in the Meiji era. Today, more than 130 Iwami Kagura troupes are acting at local festivals and events in which dancers with traditional wood masks take the stage and dance to the sound of taiko drums, clapping, and a yokobue Japanese flute. In May 2019, it became one of Japan’s heritages.

The virus outbreak, however, forced many of the local troupes to cancel their performances after February. Iwami Kagura troupe in Sano Town, Hamada City, Shimane Prefecture, was no exception. The troupe, which enjoys a long history since 1873, has no income at all after February.

The troupe in Sano has about 30 members in their 20s to 70s, and most of them are farmers. They’d been practicing the acts at a hall dedicated for the kagura performers after and between work hours. The performing skills have been passed down from one generation to the next.

The troupe uses appearance money from event organizers to pay the cost of costumes, transport, etc. One new kagura costume costs 1 million yen. The Sano-based troupe usually plays 30 to 40 acts a year. It has no idea how many acts they can play this year while it has bills to pay for the costumes and the maintenance for its 2-ton truck, said Yoshimitsu Sako, a deputy manager of the troupe.

In July, the city started to host weekend night kagura performance shows on a reservation basis. Though the troupe restarted the practice, not all performances are expected to resume.

The pandemic has hit hard on a shop specialized in creating outfits for kagura performers in Hiroshima, as well. The Hiroshima-based kagura costume shop, Kaguraya, laid off all of its seven employees, including some part-time workers, at the end of May this year. Some were skillful artisans, but the company had “no other choice” as no order was coming after February, according to Hidemi Sugesawa, president of the only kagura costume shop in Hiroshima.

Sugesawa opened the shop in 1998 after quitting his office job to make his dream come true. He also was on the stage until two years ago, and his love for kagura is extremely deep. Now, he and his daughter, an ex-employee of the company, are the only two in the company for creating new outfits for performers who placed orders before the pandemic and repairing old costumes.

Hiroshima sees no light at the end of the tunnel. As an alternative, an NPO, Hiroshima Kagura Art Institute, and other groups have launched a crowd-funding campaign “Hiroshima Kagura Resuming Project” in August to prepare for crowd-free livestream kagura performances. They plan to use the fund to pay appearance money to performers and the cost of costumes and masks to the shops.