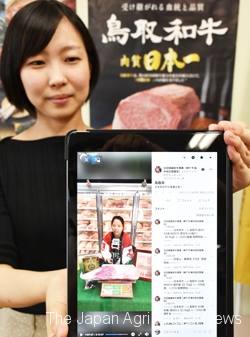 A photo taken in the city of Tottori shows a tablet computer screen displaying a Tottori wagyu beef auction conducted on Facebook using its comment section for buyers to write down bid prices.

The prefecture hopes to maintain and expand beef exports which have recently been declining amid the COVID-19 outbreak.

Blocks of sirloin steaks and fillets are put on sale on a Facebook page of a meat wholesaler in Taiwan and buyers write down their bid prices in the comment section.

The first auction, held on May 29 on the page specially created for Tottori beef, attracted 76,000 views, as a meat wholesaler live streamed the event, showing different beef cuts and explaining their tastes.

Through the auction, 121 people bought a total of 120 kilograms of premium beef that were sold in blocks as well as in 200-gram packs of sliced beef priced at 2,376 yen each. The total sales amounted to some 2 million yen, with consumers making purchases equivalent to 15,000 to 18,000 yen in average.

Taiwan is a main importer of Tottori wagyu beef. In fiscal 2019, Tottori’s exports of the beef to Taiwan reached 11 tons, occupying 90 percent of the total. But the exports were halved in April and May, as demands slowed among the restaurant industry around the world due to the new coronavirus epidemic.

The Tottori Prefectural Government officials said they came up with the idea of holding an online auction as 30 percent of wagyu beef sales in Taiwan are conducted online.

“We hope to maintain the volume of exports by making efforts to avoid losing customers,” said an official of the Tottori government’s division to expand sales channels and boost exports.

The auction was part of the prefectural government’s project launched under its supplementary budget passed in April to cope with the pandemic. The government entrusts sales to the Taiwanese meat wholesaler and also offers promotion materials such as posters.