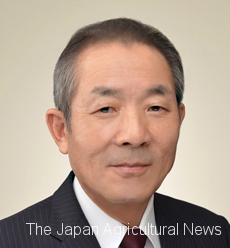 Jul. 4, TOKYO – According to the announcement of the Central Union of Agricultural Cooperatives (JA-ZENCHU), its current Chairman Toru Nakaya was re-elected at the election held on July 3. The 70-year-old chairman of a Wakayama-based agricultural cooperative (JA Wakayama Chuo) won out over Shojiro Nakanishi, a 69-year-old chairman of a Tokushima-based agricultural cooperative (JP Tokushima Chuo). Nakaya will start his second term as JA-ZENCHU Chairman at an ordinary general meeting on August 20. “I’m determined to devote myself to blaze a new path to the future of Japan’s agriculture, farm villages, and agricultural cooperatives,” he said in his comment after the election. He will keep the focus on internal reform and the expansion of farmers’ income, he emphasized.

The election took place as Nakaya’s first 3-year term is going to end in August this year. A total of 253 representatives of JA ZENCHU, mostly local JA chairmen, were required to cast votes by mail from June 18 to July 3. Out of 249 valid votes, 157 went to Nakaya while Nakanishi received 92.

“I’m determined to prepare myself again” to face the difficulties in the agricultural industry and JAs, Nakaya said in his comment after the votes. “I’ll promote constant internal reform and make the utmost effort to increase farmers’ income, expand agricultural production, and revitalize local economies.” In the election campaign, he emphasized his intention to bring together the organization by making the most of the experience and achievements he made in the past years.