Farmers in Kumamoto severely hit by floods and mudslides

Rice paddies are seen filled with mud in Ashikita, Kumamoto Prefecture, on July 5 after a mountain slope collapsed following a torrential rain.

KUMAMOTO, July 6 – Farmers in Kumamoto Prefecture in the southern Kyushu region, hit hard by floods and mudslides caused by torrential rain, are finding their lives changed drastically, with their farmlands and facilities severely damaged.

A 78-year-old rice farmer of the Tagawa district in the town of Ashikita, Kumamoto, was at a loss what to do with his rice paddies filled with mud.

On July 5, the Self-Defense Forces completed rescue works at a site in Tagawa where a landslide occurred and local residents began restoring the roads.

“The whole place looked like an ocean,” the farmer said, recalling the rainfall that became heavier than ever in the early morning of July 4.

At around 4 a.m. on that day, he felt something unusual with the rain, but decided to stay home and waited nervously, thinking it would be dangerous to evacuate in darkness.

Since it started to get light outside around 5 a.m., he went out of his house and found that the rice paddies in front of the house were overflowed. Houses in the neighborhood were hit by a mudslide, as a mountain slope collapsed.

All of his 1-hectare farmland was covered with mud. “We were looking forward to harvesting organic rice that we started cultivating last year,” the man said. “If the government is going to offer assistance, I hope it will come soon.”

A 47-year-old strawberry farmer of Ashikita had his 10-are greenhouse for seedlings flooded after a nearby river overflowed. He said he was shocked to see the greenhouse which had only been renewed in May. 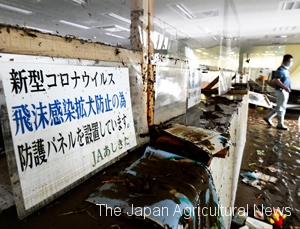 The main office of JA Ashikita in Ashikita, Kumamoto Prefecture, is seen covered with muddy water on July 5 as a nearby river overflowed following a torrential rain.

The 2-meter-high greenhouse had been nearly completely submerged in water at one time, but the seedlings remained standing on the raised floor. “I hope I can save them if possible,” the man said, looking at the seedlings covered with mud.

At the main office of JA Ashikita, an agricultural cooperative in Ashikita, muddy water flowed into the first floor as nearby Sashiki River overflowed. A large refrigerator located outside the adjacent farmers’ market fell down and the whole parking lot was filled with mud.