HYOGO, Apr. 20 – The cherry blossoms were in full bloom on April 13, 2020, in Shiso City, Hyogo Prefecture, in the upper reach of the Ibo River, the origin of hand-made Ibo-no-ito somen noodles. “The flowers are the same, but they look totally different from two years ago,” said Takahiro Taniguchi, a 58-year-old owner of Taniguchi Cattle Farm, which has been in business in Shiso for 29 years. Then, he turned his eyes to a piece of paper in his hand. It was the list of the bid prices of the meat sold by his colleagues today, and the numbers in the note are all in the upper 1,000-yen range per one kilogram. He was holding the note tightly, causing some wrinkles in the paper.

In April 2017, the price of Kobe and Tajima beef carcasses hit the highest level of 4,500 yen per kilogram. New demand was created by inbound tourists visiting Japan ahead of the Tokyo Olympic and Paralympic Games. Due also to the strong demand in the export market, the industry has been enjoying strong momentum, and the price of calves almost doubled to 1 million yen each. Hyogo-based beef growers borrowed money to purchase such expensive calves, anticipating that they can sell the cattle at higher prices in 2020.

Two years later, the dream was shattered as the coronavirus spreads in the world. From the end of last year, the beef price in the market fell like rolling down a steep slope. It reminds us of the nightmare in 2001 when the unit price of beef dropped below 2,000 yen in the market affected by bovine spongiform encephalopathy (BSE). The price today is so much close to cutting the purchase price of the calves.

Then, what is the reaction of consumers to the sharp fall of the beef price? “I love Kobe beef,” said a shopper at a butcher that also sells Kobe beef in Suginami Ward, Tokyo. The shopper said she is from the west Japan area, and she knows that beef producers are in trouble. “But Kobe beef is still too expensive, “she said in a hesitant voice. The prices have dropped, but the consumers still think they are expensive as the entire market is shrinking. 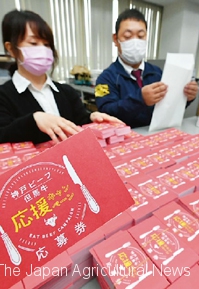 Taniguchi looked up and said, “we were probably dancing in the bubble.” “The market price today (on April 13) is at the level eight years ago, which is the time we began exporting beef. It’s time for us to go back to basics and look at the needs of our domestic customers.” Taniguchi is determined to retire in three years when he turns 62. His eldest son, Kota, started to work at the farm six years ago and turned 31 this year; the age Taniguchi began his farm. Taniguchi wants to set a clearer vision before he passes the baton to Kota.

At the moment, however, the main export partners of Kobe beef in Europe and China have stopped importing beef from Kobe, while restaurants in Japan have fewer customers due to the stay-home requirement. Freezers of wholesalers who bought the meat to support the farmers are almost full. There are no bright signs.

“Both the BSE and the foot-and-mouth disease were problems with cows, but the coronavirus is affecting the entire world,” said Tetsuno Tanimoto, manager of the livestock section of Hyogo Headquarters of National Federation of Agricultural Cooperative Associations of Japan (JA ZEN-NOH Hyogo). “There is nothing much the farmers alone can do,” he continued. JA ZEN-NOH Hyogo has just launched a campaign to encourage the consumption of Kobe beef and Tajima beef in Japan. The country must overcome the crisis by connecting producers, distributors, sellers, and consumers. The challenge has just begun.

Breeds and production of Tajima beef cattle are strictly controlled using a stringent management system, and some cows that meet proper marbling criteria are called Kobe beef. Tajima beef and Kobe beef are smaller in size than crossbred cattle, so it’s been hard for the growers to improve their income even though the unit prices are high. However, after starting the export to China and Macau in February 2012, Tajima beef and Kobe beef have become top wagyu brands in the export market.