“Phone of Wind (Kaze no Denwa)” stands on a hilltop, receiving visitors from all over the country. Breezes blowing off the ocean has a fresh saltiness.

IWATE, Mar. 11 – “I’m sorry that only I have survived. I’ve always wanted to say thank you.” People come and talk to the phone in a white fancy phone booth that stands alone on the hilltop in Otsuchi Town, Iwate Prefecture. Inside the booth, there are a black phone and a notebook. Though the phone is connected to nowhere, people come and visit this place to mourn the loss of their loved one after the 2011 massive earthquake hit the Tohoku region of Japan. A boy who lost his parents in their wrecked house and a mother who lost her daughter in the enormous tsunami came here to talk to their loved ones in heaven and let out the deep sorrow that they’d been holding back. By doing so, they find a link with loved ones in mind.

The phone booth was built by Itaru Sasaki, a local 75-year-old farmer who grows flowers and vegetables. He created a 7000-square-meter yard called Memorial Garden and made it open to the public in April 2011. More than 100 kinds of flowers and plants are planted around the booth. “I lost my buddy in the tsunami. I’d been thinking about the meaning of being alive in a place where anyone could easily die,” said Sasaki.

The friend of Sasaki always gave him a call suddenly and said, “How about a drink?” Then, they met for drink and often talked all nights. “I always replied him in a rough voice and said ‘you are always so sudden to call me,’ but actually, I was so happy to receive his calls.”

On March 11, nine years ago, a tsunami of 20 meters high at the maximum hit the small town in Iwate. The best friend of Sasaki was living in an oceanfront house. Sasaki tried to call him but the phone was never answered. “He’ll call me as usual. He can’t die,” Sasaki talked to himself, but that wasn’t the case, and his body was found dead. Sasaki could hardly recognize the friend, but he found a note in the pocket of the deceased friend. What’s on the note was Sasaki’s phone number. “He kept it with him at all times.” Sasaki was struck with despair and emptiness, and his body was shaking, he said.

“I couldn’t even tell him that I thank him and I’ll catch up with him later.” And so, he decided to build the phone booth in his garden. Knowing that the phone was disconnected, Sasaki dialed the number of the friend’s phone slowly. “I’m always with you when I drink. Thank you. You’ve been a good company,” Sasaki talked to the friend. Speaking to the phone gave Sasaki a small relief. 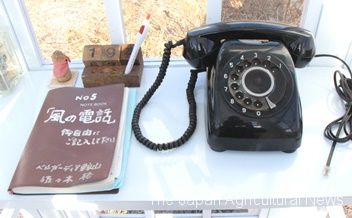 Sasaki’s open garden and the phone booth became famous through mass media and by word of mouth. So far, the booth was used by more than 40,000 people.

Sasaki often talks to the visitors and invites them join him for a cup of tea. Though many people are quiet at first, they’ll slowly open their hearts and start talking to Sasaki with tears in their eyes. “As long as you remember, your loved ones live in you. So please live your life with all you have,” he often says to his visitors.

Some people leave messages on the notepad. “Just once. I just want to hear your voice again. I want to talk to you.” “Sis, I want to see you.” Some wrote letters to their loved ones. “Thank you. I could let out what I’d been holding back.” Some are the messages to thank Sasaki. “I’ll never get over this emotional scar,” said Sasaki. However, “I can get along with it,” he added.

For nine years since the quake hit Japan, Sasaki’s Memorial Garden is open to the public to heal families and friends of those lost or missing. He’ll keep talking to the visitors to the hill. The phone will never be answered, but their thoughts for the loved ones are always connected.

<Note>
The tsunami on March 11, 2011, flooded almost half of the land in Otsuchi Town, Iwate Prefecture, causing 1,233 death and 413 missing, as of December 2019. The town has farmlands of 12 hectares in total, but half of them are still not suitable for farming due to the flood damage. Many families have left the town. The number of farming households dropped to 152 in 2019 from 195 in 2010.