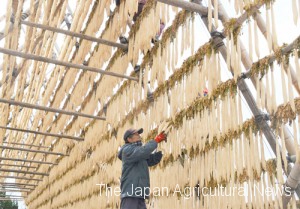 Miyazaki Prefecture, Feb. 15 – In Tano Town, Miyazaki Prefecture, sun-dried daikon radishes are almost ready for shipment. Building significant scaffolds called yagura for drying radishes in the sun and the cold wind in winter is a food culture that gives Miyazaki’s signature scenery. Now people have gathered to make “the number one production of sun-dried daikon radishes and daikon yagura towers in Japan” one of the Japanese Nationally Important Agricultural Heritage Systems. Officials of a local agricultural cooperative (JA Miyazaki Chuo), Tano Town Commerce and Industry Association, and Prefecture and Town governments have formed an association, and they are boosting their activities.

-Inviting more people for daikon hanging to heighten the mood

In late October, farmers start building yagura, the work that will take almost seven days. Kazuo Matsuyama, a 62-year-old head of the group of dried daikon producers of JA Miyazaki Chuo, prepares two yagura towers of 66 meters in length and 6 meters in height, each for his 26,400 radishes. In December, he binds the radishes into pairs and hangs them on his yagura to let them dry in the sun, usually for about two weeks.

“This time of the year, we have strong wind called Kirishima Oroshi that blows from the Northwest. The radishes dry so quickly that they maintain good color and taste better,” he explained proudly. Then the sun-dried radishes are sorted and sent to JA’s processing plants, for example, for pickled radishes.

JA Miyazaki Chuo has 77 sun-dried daikon producers in the group, and they produced 1,262 tons of dried daikon in total this year. Some of them are sold to long-established restaurants in the Kansai region that care very much about their taste. 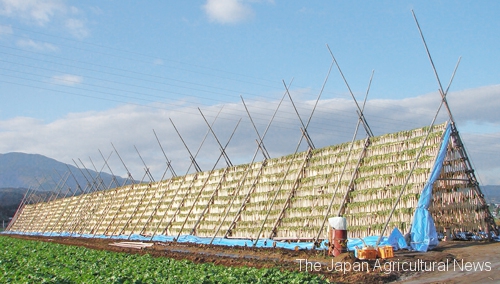 Magnificent view of daikon yagura (in Miyazaki Prefecture, a photo from the association for making Japan’s number one production of sun-dried daikon radishes and daikon yagura towers one of the Japanese Nationally Important Agricultural Heritage Systems)

The association for promoting Miyazaki’s sun-dried daikon production and daikon yagura was established in April 2017. JA took the lead in the establishment to protect this local agricultural system. Winning the recognition may also help local farmers and economies to revitalize. Their first application in 2018 was rejected, but they plan to make another challenge in 2020.

Their goal in 2020 is to involve more locals in their activities. They already launched the program to invite local children to lectures and first-hand events on the culture of daikon yagura and pickled daikon. The program includes daikon hanging and making pickles with kids from local elementary and junior high schools.

Shunrou Kurihara, chairman of the association and JA President, said that the seasonal sight of daikon yagura is something they must protect for younger generations. “The tradition is loved and recognized by people at home and abroad. JA will support the group of dried daikon producers as well because these are Miyazaki’s primary winter products,” he said in a positive voice.

“We will boost the activities for the acknowledgment and help protect the traditional farming methods,” said an official of the Tano Branch of the Association Secretariat. Radish growers are the busiest drying radishes from December to January. To secure the workforce, Tano City also plans to boost the communication between farmers and college students, for example, using a matching app developed by students at Miyazaki University for students to look for part-time jobs at farmers.