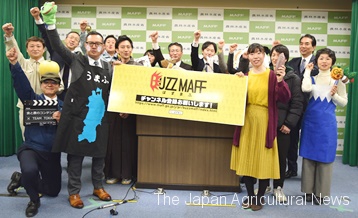 TOKYO, Jan. 8 – The farm ministry of Japan launched a new YouTube channel called Buzz Maff on January 7, 2020. The contents of Buzz Maff are created by ministry officials, who voluntarily gathered to plan, design, and create one streaming video a day for the online video sharing website. Its stories feature agricultural products and life in farming towns and villages. Its targets are not limited to young Japanese, and it aims to create a buzz among viewers including foreign nationals living in Japan.

There are 14 teams of in-house creators, and some stories are already available on YouTube.

“An ordinary sweet potato may look different after you’ve seen this,” a female creator of the section named “Satsumaimo Daisuki Channel” said in her first story. In her first post, the 25-year-old worker of the Crop Production Bureau interviewed the head of a company specialized in sweet potato product planning. During the interview, they discussed that “there are a great number of sweet potato lovers” and “sweet potato digging excursions in their childhood are probably making them sweet potato lovers.”

Agriculture Minister Taku Eto serves as the Honorary Editor-in-Chief of Buzz Maff. As a member of the team who leads the project, he emphasized to the press after the Cabinet meeting on January 7 that he wants to show young people in Japan and YouTube viewers worldwide that Japan is such a fascinating country. The ministry puts the priority on the ideas of the creators, and “there will be no top-down instructions about the contents,” he explained. “’Buzz Maff can renew the image of the agriculture, forestry and fisheries industry,” Eto said.