Water from the Kuji River flooded this fruit farm. A farm owner was sterilizing his apples to minimize the loss. (In Daigo Town, Ibaraki Prefecture)

TOKYO, Oct. 16 – Damage caused by the typhoon that blew through mainly the eastern part Japan on Saturday has become more apparent on October 15, 2019. Because of the torrential rains caused by the Typhoon Hagibis, many rivers overflowed and inundated houses, farmlands, and greenhouses. The water attacks were confirmed at many places in the eastern part of Japan, and enormous agricultural damages are expected. However, it will take time to clarify the whole picture.

Ibaraki Prefecture: No prospect for recovery

In Ibaraki Prefecture, the Naka River overflowed, flooding the greenhouses of nearby farmers. Some of the nurseries now have broken frames and mud inside, which make it extremely difficult for the farmers to grow new agricultural products again.

Flooding of around 1-meter deep hammered greenhouses at a 25-are strawberry farm in Hitachi Omiya, Ibaraki Prefecture, the area covered by a local agricultural cooperative, JA Hitachi. The owner of the farm grows six varieties of strawberries in the greenhouses, including Ibara Kiss, but all of them were covered by mud. The 39-year-old farmer lost almost everything including young strawberry plants, a retail shop, an office, and several agricultural machines and equipment. “When providers of agricultural equipment are already busy handling damages caused by the Typhoon Faxai, when can I expect to get help at my farm? I have no idea. I’m in desperate need of support in terms of money and workforce,” he said.

In Daigo Town, which is also part of JA Hitachi, water from the Kuji River hit hard on apples, which were almost ready for shipment. A local 70-year-old pick-your-own apple farm owner is now busy sterilizing apples on the trees. His house was submerged in the flood water of three meters deep, and his farm is covered by mud and debris from the upper part of the river. “I was almost ready to give up my farm on October 14 when I received a visit from a kindergarten. This kindergarten has an apple-picking excursion every year at my farm. The visit made me change my mind, and now, I want to save my apples for small children,” he said.

Miyagi Prefecture: All ripe fruits and vegetables are lost 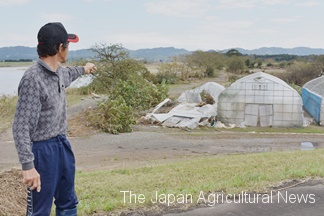 The typhoon tore down this man’s nurseries. (In Marumori Town, Miyagi Prefecture)

In Marumori Town in Miyagi Prefecture, the Abukuma River overflowed, flooding even the Town Hall, due to the Typhoon Hagibis. On the evening of October 14, the flood water in the central area returned to the river, and residents are now able to see how the water caused landslides and collapsed the roads mainly in the mountainous region.

Vegetables were almost ready for shipment, but the flood submerged them.

“I have never experienced the flooding of this depth. I may have no agricultural income this autumn,” a 69-year-old male towner said sadly. The owner of a 2-hector farm near the junction of the Abukuma River and the Gofukuya River grows rice and vegetables, but the water wiped out all of his autumn vegetables including Chinese cabbage, cabbage, and daikon radishes. “I have no energy left. I need to talk to my son before I decide whether I should close or keep the farm,” he said.