Better get ready for the fight – Hiraniwa Bullfight Meet in Kuji 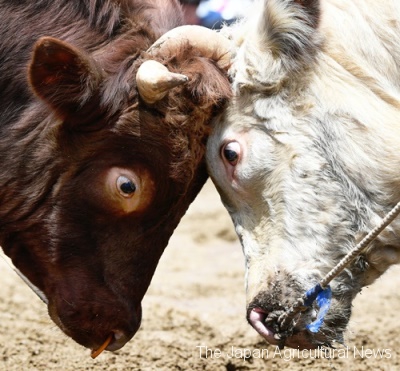 Locally-grown Japanese shorthorn bulls fighting a match in Hiraniwa Bullfight Meet. The bulls glare at and push each other strongly. (In Kuji City, Iwate Prefecture)

IWATE, Jun. 17 – Yamagata Town, Kuji City, Iwate Prefecture, is the only place to host a bullfight meet four times a year in the Tohoku (North Eastern) region in Japan. The meet, called Togyu in Japanese, is for local shorthorn bulls which are known to have strong backs and good patient. The fighters in this year’s June tournament called “Tsutsuji Basho” included a young bull of about 400 kilograms and the Yokozuna Champion of over 1 ton, and they all staged exciting games. 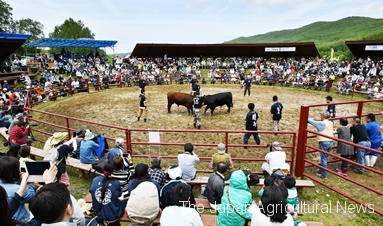 The town has a permanent bullring. This year’s Tsutsuji Basho attracted 1,200 people from across the country.

The Hiraniwa Bullfighting Meet is held at a permanent bullring of a diameter of 2.2 meters on the Hiraniwa Highland. Bull handlers called seko scream and slap the bulls by a leash to help and encourage them to lock horns with each other. This year, a total of 26 cows fought the matches in Tsutsuji Basho.

Their horns make a thud noise when the bulls lock and struggle to get an advantage over the opponents. When one is good enough to push another over to the edge, the audience gets louder. The basic rule of the matches is for seko to draw the game when they think the most exciting part is over. 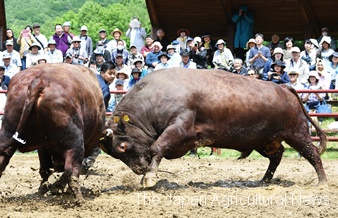 The town has a permanent bullring. This year’s Tsutsuji Basho attracted 1,200 people from across the country.

“You are a very gentle boy, but you did a good job,” said Keisaku Onodera, head of a local agricultural cooperative in Iwate Prefecture (JA Shin-Iwate) to his 2-year-old fighting bull after the match.

Yamagata Town is a producer of fighting bulls called Nambu Ushi, which are sold for bullfight meets all over Japan. The quarterly events here are held to demonstrate the high quality of the cows grown in the town and attract cow owners from across the country. For that reason, they let young bulls of under two years old participate in the meet and draw the games in the middle so that losing bulls will not suffer psychological damage. Senichi Mano, chairman of the Ojiya Togyu Promotion Association, also came to see the bullfight in Yamagata and said, “Bulls grown here has thick bones and tenacious nature. They are excellent and have a good chance of becoming Yokozuna champions.” 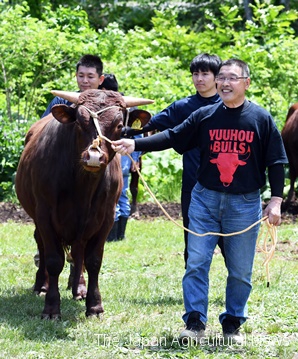 Keisaku Onodera, head of JA Shin-Iwate, entering the circle with his 2-year-old bull.

The origin of the bullfight in Yamagata is not clear. However, it’s said that it’s originated from the battle between cows for delivering salt and iron in the Edo period. The purpose of the battle was choosing the strongest bull to lead the caravan. Later on, some bulls were sold to Niigata Prefecture where bullfighting was active, and they found the talent of the bulls grown in this town, and that’s how they’ve become famous for being excellent fighters.

“We support each other and grow cows together. Our bullfighting matches are given warm support by a lot of people,” said Toshiyuki Kakiki, 46, who is a farmer and a vice-chairman of the Iwate Hiraniwa Highland Togyu Association.