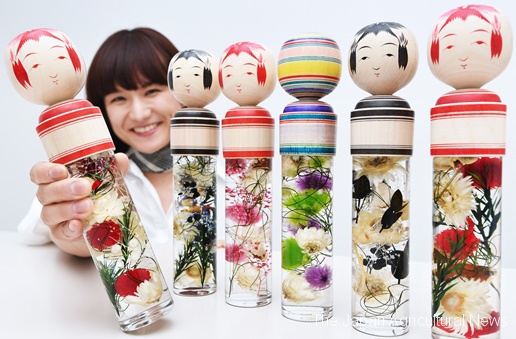 Kokeshium has been popular among kokeshi fans. Thanks to handiwork, each doll has a different face and expression. (in Setagaya Ward, Tokyo)

TOKYO, Jun. 24 – A kokeshi-shaped herbarium bottle from You Kaen, a flower distributer and seller based in Setagaya Ward, Tokyo, has been a big hit.

The name of the product is Kokeshium. It’s a kokeshi doll with a glass body that contains dried flowers of domestically-grown globe amaranth, sophila and such, and specially designed herbarium oil. On top of the bottle is the face of a traditional wooden doll called Naruko Kokeshi made by artisans in Osaki City, Miyazaki Prefecture. The florist proposed it to raise attention to traditional arts using flowers and unique design. As soon as the product was released in May in Sendai, Miyagi Prefecture, it drew the attention of kokeshi lovers and international tourists. As it’s not possible to mass-produce the product, you need to make a reservation and wait for approximately a year to buy one.

A 38-year-old designer of Kokeshium, Taichi Nagata, said, “I want to promote the beauty of other types of artworks as well, by combining them with flowers.” Kokeshium comes in three sizes, and its price starts at 6,000 yen (excluding tax).