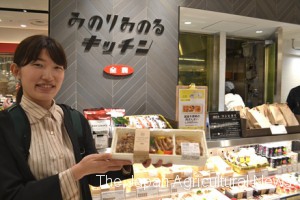 TOKYO, March. 23 ― Japan’s largest farmers’ group has opened an outlet at Shiganaga St., one of Tokyo’s most affluent district, to offer takeaway options such as lunch boxes and other ready-to-go foods that use Japanese-grown farm products.

The outlet, called “Minori Minoru Kitchen,” is part of a project launched by JA ZEN-NOH, the National Federation of Agriculture Cooperative Associations, the marketing arm of JA group, to boost an increase in consumer interest in locally produced foods.

In 2010, JA ZEN-NOH opened its first restaurant that use Japanese-grown farm products. Since then, its restaurants and café have grown to 15 outlets nationwide.

Japan’s takeaway food market has grown to 10 trillion yen in 2017 and will continue to grow further in the next years, experts say.

The growing demand for takeaway food industry is a key factor driving JA ZEN-NOH to open its first takeaway outlet.