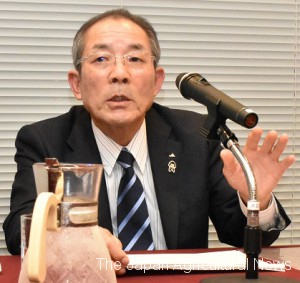 TOKYO, Dec. 14 – Toru Nakaya, head of the Central Union of Agricultural Cooperatives (JA-ZENCHU), on Dec. 12 called on the government to place food security at the center of its 10-year Basic Plan on Food, Agriculture and Rural Areas.

Citing forecasts by the National Agriculture and Food Research Organization, he said Japan’s agricultural population is expected to continue declining, dropping to 1.22 million in 2025, down 40 percent from 2015. He expressed concern over the fact that the rate of decline for farmers aged below 40 is especially high, estimated to be as much as 60 percent.

“There is no guarantee that food will be imported from foreign countries for good,” Nakaya stressed, referring to worldwide data on increasing number of disasters, climate change and population growth.

He said he will lead the movement to share the situation surrounding food and encourage debate on food security among Japanese consumers.

Providing dietary education is also important to increase understanding for agriculture, he said, adding that he will ask the education ministry to support the move.

“Unless the government ensures stable supply of food to foster people’s lives, I don’t think it can call itself an industrialized nation,” he said. “We have to start coping with the issue now for five, ten years hence.”