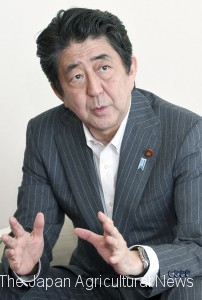 TOKYO, July 20 – Prime Minister Shinzo Abe said Japan will not make compromises that go beyond the Trans-Pacific Partnership agreement in the new bilateral trade talks with the United States.

In an interview with The Japan Agricultural News held at the Prime Minister’s Office on July 19, Abe discussed Japan’s stance in the ministerial-level “free, fair and reciprocal” trade talks, dubbed the FFR talks, to be held soon. He also commented on farmers’ criticisms on how farm policies are decided.

Q. Farmers are increasingly worried over the Abe administration’s trade policies, as the government has been signing one trade deal after another, including the Japan-EU Economic Partnership Agreement and the TPP deal. What do you think about allocating budgets to ease their worries and help stabilize their businesses?

A. My basic idea is to sign free trade agreements and create an economic zone based on high-standard, free and fair rules. But I have a responsibility to respond to the voices of people who have concerns that such agreements could have an adverse impact on their business.

In the TPP agreement and Japan-EU EPA, we managed to exempt important items from tariff cuts, but we will continue working to reduce remaining worries and concerns. We must take sufficient measures so that farmers can maintain their businesses without feeling insecure. We will take necessary steps to strengthen the agriculture, forestry and fisheries industry under the outline of comprehensive policies related to the TPP accord.

I am aware that the industry is worried about how Japan will respond if the U.S. makes demands in the agriculture sector that go beyond the TPP deal as conditions for returning to the trade pact. I clearly said in the Lower House Cabinet Committee in May that I had promised with farmers there would be no further compromise in the farm sector.

I have also repeatedly and clearly told U.S. President Donald Trump that Japan would never make further compromise. We will keep the same stance in the negotiations for the FFR talks.

Q. Many farmers argue the Abe administration should change the Prime Minister’s Office-led decision making regarding farm policies, thinking that the direction of agricultural policy reform has been decided by members of the prime minister’s advisory panels such as the Regulatory Reform Promotion Council, who don’t know the realities of farming.

A. I really understand what you mean. I believe farmers wonder whether scholars and business people really know what it is like to work in the fields or whether they have ever even touched the soil. When deciding policies, it is necessary to listen seriously to the voices of people actually involved, and the same is true of the Regulatory Reform Promotion Council. So we are newly inviting Ritsumeikan University Prof. Yoko Niiyama, who is an expert on agricultural policies, as a member of the council. I hope she will give us precise advice on the agriculture and food sectors.