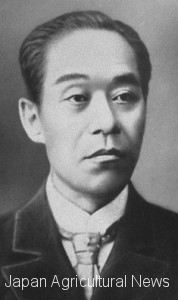 Owing to efforts of Yajiro Shinagawa (1843-1900, later the Interior Minister) and Tosuke Hirata (1849-1929, later the president of sangyokumiaichuokai (general association of cooperatives)), who had met in Germany studying abroad, sangyokumiai (cooperatives) law was enacted in 1900. In the year, it has also been enacted the Insurance Business Law. Keijiro Okano (1865-1925, Doctor of Laws, later cabinet legislation bureau director), who was a bureaucrat in the Ministry of Agriculture and Commerce, played central role in drafting both of laws. 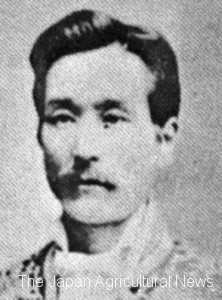 Tosuke Hirata (from “The world of the movement of sangyokumiai (cooperatives),” Nihon Keizai Hyouronsha Ltd.)

In 1880, He published “The private economy book” and explained insurance business in detail. In the section of the “fire insurance,” he wrote that “There are approved mutual organization to compensate damage caused by fire or thunder against various tools, fields, the forest, etc.” This was the first literature of Japan to have introduced the insurance business systematically. 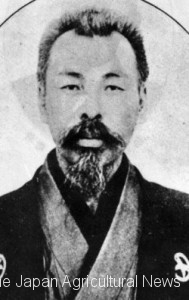 Yajirō Shinagawa (from “The world of the movement of sangyokumiai (cooperatives),” Nihon Keizai Hyouronsha Ltd.)

In 1868 Fukuzawa transferred his Dutch studies cram school to Shiba of Tokyo (Minato-ku) and renamed it “Keio”. Later he moved the school to Mita (same) and opened the course of the “Insurance Law”. He did not have his own tackle on insurance business, but his idea was passed on to his disciples. Yukichi Fukuzawa was the first Japanese person having connected insurance contract with the foreign company as an individual.

Fukuzawa’s disciples, who learned the “self-help of the spirit” based on western modern thought, started the study of life insurance. Yuteki Hayashi (1837-1901) established the first institutionalized life insurance entity. He made a “death insurance rules” as the internal regulations of his import trading company “Maruya Shokai (predecessor of Maruzen)”. The rules provided that, If the employee who had accumulated reserves died during his tenure, his or her family could receive the commensurate amount of benefits. It was life insurance itself. The idea was taken over by Taizo Abe, also Fukuzawa’s disciple (1849-1924).

After the Sino-Japanese war, companies to run the insurance business were born one after another. There were many small similar organizations. There were also speculative organizations, which lost their credit and extinguished soon. At the time, number of life insurance or similar business entities was said to have reached several hundred.

Government was forced to move to regulation. As a result, insurance business became to be regulated by the Insurance Business Law. The law provided that insurance business entity should be limited to “stock company or mutual company.”