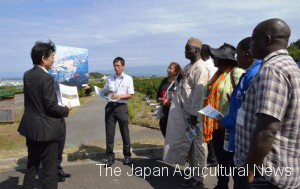 In Shizuoka city on Sept. 1, African cooperative leaders are being explained on how the farmland consolidation project has been conducted.

SHIZUOKA, Sept. 2 – Leaders of cooperative organizations in African countries had a study trip at Shimizu Agricultural Cooperative, called as JA Shimizu, to observe activities carried out by Japanese farmers at their cooperative.

They came to Tokyo to learn about the Japanese cooperative movement by participating in a seminar that is being held from August 28 to September 6 jointly by Japan Consumers’ Co-operative Union and United Nations’ International Labour Organization (ILO) in collaboration with Japan Joint Committee of Cooperatives (JJC) heading an organizational network of various cooperatives in the country.

Their field trip to the JA Shimizu was organized as a part of the seminar program, providing them with opportunities to deepen their understanding of Japanese farmers’ activities at the grass-root level by visiting a farmers’ joint facility for grading citrus fruits at the JA Shimizu, a greenhouse for growing rose plants, and JA’s pilot store “Kirari” (literally, twinkling) selling local specialties produced by its member farmers as well as by being informed of a comprehensive farmland consolidation project sponsored by the Shizuoka prefectural government.

The group consisted of four seminar participants from Ghana, Kenya, Nigeria, and Swaziland, who were accompanied by officials of ILO and cooperatives’ global organization named as International Co-operative Alliance (ICA).

These participants are presidents and directors of national cooperative organizations specialized in activities such as credit business and promotion of farmers’ production.

While the seminar was implemented mainly at Tokyo on a tight schedule, including a visit to Norinchukin Institute of the Norinchukin Bank (Central Cooperative Bank for Agriculture, Forestry and Fishery), the African cooperative leaders spared one day for visiting a primary agricultural cooperative in a local region.

When the group observed the joint facility of citrus fruit producers at the JA Shimizu, one of the participants expressed his impression, saying “I have realized that farmers can build up a large-scale marketing system if each of them works together by bringing a small amount of money and power into a cooperative organization. This was a big surprise to me.”

One of JA’s member farmers received the group at his greenhouse for growing rose plants and faced a barrage of questions from African cooperators asking construction costs of the greenhouse, an annual harvesting cycle of flower rose and the like.

The seminar participants also observed crop fields consolidated in the comprehensive farmland improvement project promoted by the prefectural government in collaboration with the JA Shimizu. On the spot of the project, JA’s staff members in charge of the project gave the African leaders a briefing on implementation of the project which has consolidated farmlands by clearing hilly areas into flat lands. They emphasized that farmers have been successful not only in raising yields of crops, but also in reducing farm labor on their newly aggregated farmlands.

Before leaving the JA Shimizu, Buchekabiri Sifa Nelly Chiyoge, ICA Regional Director of Africa, thanked JA’s people on behalf of the seminar group and told them, “Agriculture is a significant industry that we need for alleviating the poverty in African countries. We can learn a lot of things from small-scaled farming in Japan. We highly appreciate today’s opportunity to come in contact with Japanese farmers’ technology and get useful information from their cooperative.”

The seminar participants plan to make visits at offices of National Federation of University Co-operative Associations and Japan Workers’ Co-operative Union in Tokyo before the seminar is closed on September 6. They are also scheduled to join an open seminar on “Cooperative movements in Africa” on September 5.