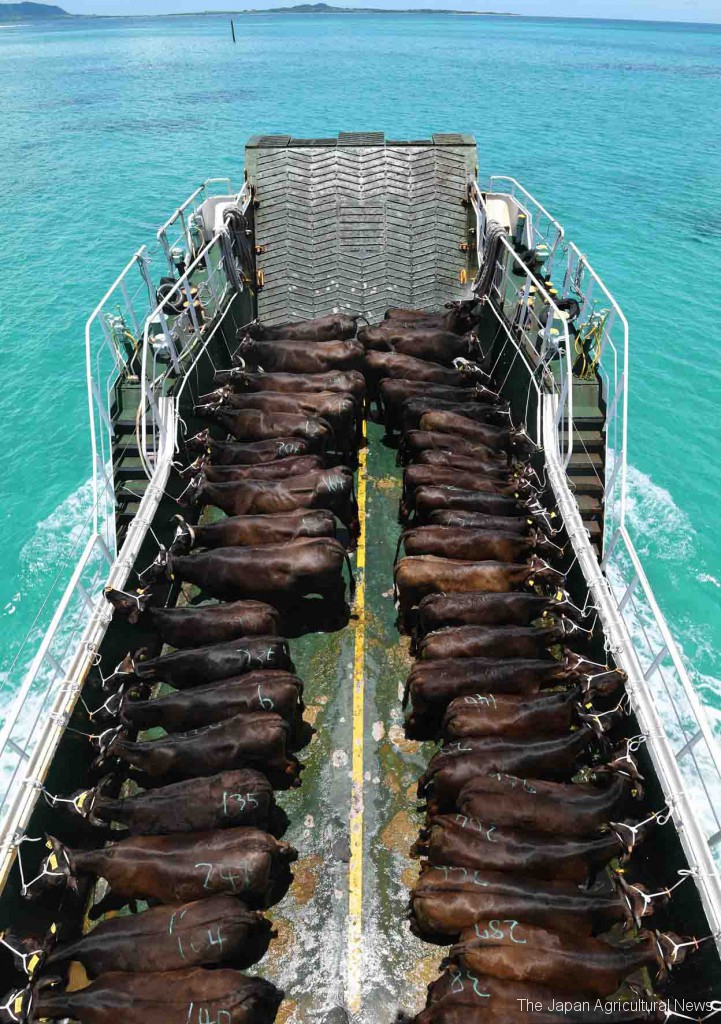 A Yaeyama calf boat traveling from Kuroshima to Ishigakijima island

OKINAWA, July 30 ― A boat owned by an agricultural cooperative in Okinawa (JA Okinawa) is playing an important role in Yaeyama islands, which are 400 km away from the main island of Okinawa and at the southwest end of Japan. The vessel is exclusively designed for moving young cattle from an island to an island to deliver the calves produced by farmers on small islands to Ishigakijima Island. The calves will be then transported to the mainland of Japan. The ship has been in service for more than 40 years since the first JA boat was introduced. 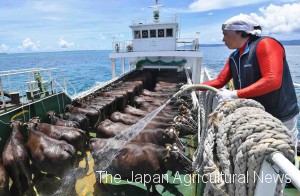 A little past noon on July 13, 2017, the vessel “JA Yaeyama” arrived at the port of Kuroshima Island, which is the island known for having more cattle than human. (The island with a population of 220 currently grows more than 3,000 cows.) Brown spots on the white body of the 20-meter-long boat explain how old she is.

The island holds cattle auctions in the odd months, and it was the day of the auction. The boat came to the island to pick up the calves raised in Kuroshima and bought at the auction. A crew tilted down the door so that the calves can walk in the boat. The ship was soon filled with approximately 70 calves.

The crews of the boat are all employed by JA Okinawa. The boat moves the calves to Ishigakijima from Kuroshima, Kohama, Takeshima, and Aragusuku islands. A larger vessel will then carry the calves from Ishigakijima to the port of Kagoshima, where the calves are to be picked up and transported to cow growers all over Japan. 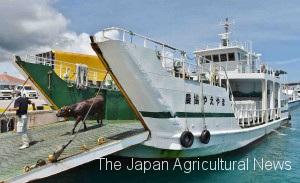 At the port in Ishigakijima Island, calves were discharged and put on a truck one by one. (in Ishigaki City, Okinawa Prefecture)

Shinji Ishigaki, 53, is a chief of the JA Yaeyama’s farming promotion center. “The advantage of JA having a ship of its own is that it can flexibly arrange the service schedule and meet our urgent needs,” he said.

The cow carrier in Yaeyama Islands has a long history, and there were times when islander relied on old small boats purchased from the US forces. But these boats were not big enough. 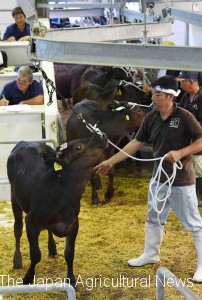 Then JA stood up to solve the problem. The agricultural cooperative in Taketomi town, which is now part of JA Okinawa, decided to build a ship of its own and started the service of the ship, called “Nokyo-maru” back then, in 1975, to build a strong foundation for boosting beef cattle production on the islands. Currently, the islands have approximately 750 farmers who produce about 10,000 calves a year in total, and nearly 2,000 of them are raised on the islands other than Ishigaki.

The second generation JA vessel began its service in 1992. Gen Tamayose, a 41-year-old young cattle grower, looked at the boat and said, “The ship also carries feedstuff and tractors for farmers. We do need this vessel to continue farming on the islands.”

This entry was posted in Cooperatives, Photos. Bookmark the permalink.