Hachimantai city government begins to export its “intellectual property right” by providing farmers in a member country of the European Union with its plant breeder’s rights, which enables European farmers to grow and market their potted gentians, special products of the city in Iwate prefecture. 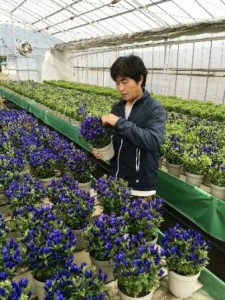 A farmer is taking care of potted gentians named “Shine Blue Asiro,” a plant breeder’s right of which is to be sold to farmers in the European Union. (Hachimantai city, Iwate prefecture ©Hachimantai city government)

A market of potted flowers in EU is much bigger than that in Japan. It is banned by EU’s rules of plant epidemic prevention, however, for Japanese growers to directly ship potted flowers with soil attached to the market.

The city government has found an alternative way of exporting its special product to the European market by selling seeds of gentians and plant breeder’s rights to farmers in EU. Earnings of the exports are expected to be invested into works such as seedlings production and variety improvement in Hachimantai city.

It is the first time for a public organization in Japan to export an intellectual property right granted to a registered variety of a flower to the EU’s market.

High-quality varieties of “Märchen Asiro” and “Shine Blue Asiro” are selected for the export. Both of them have already been registered with the authority in EU. Seeds for 2000 potted gentians have been exported to a cooperative organized by floriculture farmers in the Netherlands.