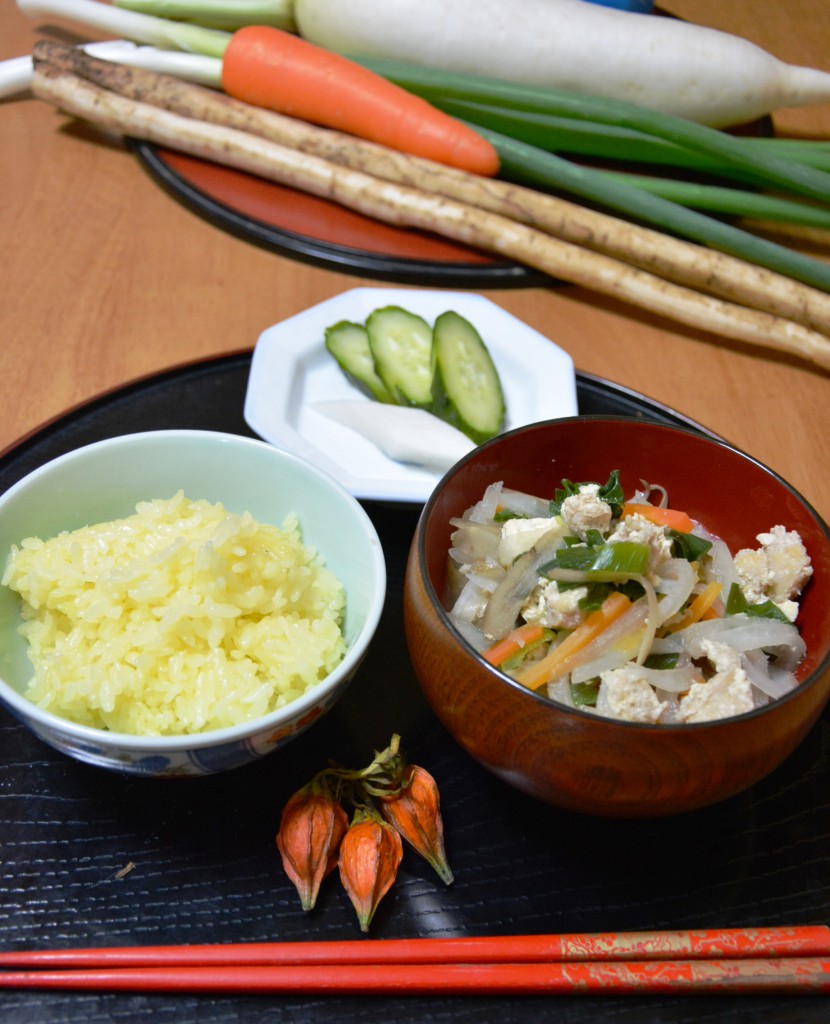 Celebratory dish that dates back to Edo period Yellow steamed rice colored with dried gardenia fruits is served with colorful flavorful topping in a separate bowl. The rice is called “o-han (yellow rice)” and the topping “o-han kayaku (additional goodies to go with o-han). This is a traditional food in Usuki-shi, Oita Prefecture. Unlike regular steamed rice, o-han is cooked with salt and its cheerful yellow color stimulates our appetite. O-han kayaku cooked with several root vegetables like carrot and Japanese radish as well as minced fish meat and tofu is rich and delicious. It’s no wonder that it still is a popular traditional local food prepared to welcome guests. The history of o-han started in the Edo period. Suffering from financial difficulties, a feudal domain of Usuki back then started to serve o-han on special occasions, instead of sekihan steamed sweet rice with azuki beans which was more expensive to cook. During the age of provincial wars in Japan, Usuki was ruled by Otomo Sorin, who was a Japanese feudal lord of the Otomo clan and one of the few to have converted to Roman Catholicism and promoted trade with Spain and Portugal. So some also say that the idea of cooking yellow rice came from Spanish dish Paella. O-han kayaku get richer and nicer when warmed over again and again. So mothers in Usuki cook it in a large portion on the new year’s eve as one of the new year’s meals that are to be eaten during the first three days of the New Year. The topping is served in a separate bowl, but people usually put them on top of ohan and eat them together. 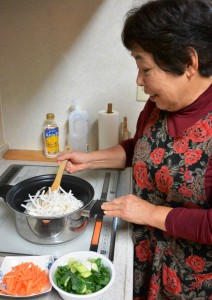 “I want to show how to cook these traditional foods and where they came from to young people,” said Niina. (in Usuki-shi, Oita Prefecture)

Nowadays, some families cook only o-han kayaku and its ingredients are also changing. Instead of a whole fish, people today often use minced fish meat or chicken meat as easier options. Gardenia is a plant that produces white flowers in summer. Its fruits ripe and turn reddish yellow in winter. They are also used in traditional Chinese medicine for their clearing, calming, and cooling properties. Toshiko Niina, a 70-year-old member of Women’s Group of Usuki branch office of Japan Agricultural Co-operative (JA) Oita said she plucks and dries gardenia fruits herself to use in her cooking. “Traditional dishes here in Usuki were created with care for our health. Each family may have different recipe for ohan, but I still want to hand down o-han and its history to young people,” she said.

2) Put 100 ml water and kuchinashi dried gardenia fruits into a pot and boil up once.

1) Cut burdock root into strips, soak in water and drain.

3) Heat a frying pan and add cooking oil. Add minced lizardfish meat and burdock and stir them to sauté.

5) Add broth and seasoning mixture and cook on medium heat for about 5 minutes.

6) Add spring onions and turn off the heat.

This entry was posted in Cooperatives, Food & Agriculture and tagged Series. Bookmark the permalink.