【Interview】 Government is “betraying” its people regarding the Trans-Pacific Partnership free-trade talks: Takashi Shinohara, head of the Democratic Party of Japan’s group “cautious” about the TPP (July 17, 2015) 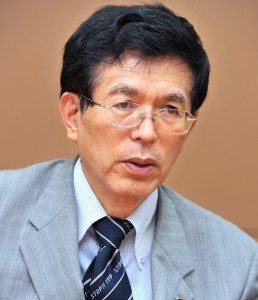 Q. How do you see the government’s negotiating stance on the TPP scheme?

A. The government and the ruling Liberal Democratic Party continue to lie about the TPP, betraying the Japanese people and farmers. The LDP won the Lower House election in 2012 by pledging not to participate in the TPP framework. But in March 2013, Prime Minister Shinzo Abe announced that Japan will join the talks. Since then, the government has changed their way of saying many times and is becoming more and more aggressive. What happened to the promise that the government will work to exempt key items from tariff cuts? The government should engage in negotiations after making sure that they can fulfill the promise under the resolutions adopted by the Diet, but we can see no signs of the government doing so.

Q. Many people say the government’s disclosure of information is insufficient.

A. The United States government has disclosed the draft document of the TPP agreement to the members of Congress and the Australian government is moving to take a similar action. Although all the TPP member nations have signed a confidentiality agreement, they are at least making their positions clear and disclosing that their negotiations are going well. Japan hasn’t even done that. We cannot possibly ratify an agreement which is negotiated in such a non-transparent way.

Q. The Japanese government is eager to conclude the talks.

A. It wasn’t right in the first place to be negotiating with the U.S. government which doesn’t have the authority to negotiate trade agreements. But the Japanese government is rushing to conclude the agreement after the U.S. Congress passed the Trade Promotion Authority bill which allows the president to expedite trade deals. It is mistaking means for ends. Besides, the TPA states that the administration is required to consult with Congress on a regular basis throughout the negotiating process and Congress has the power to override TPA if the administration falls short of meeting their negotiating objectives. Republicans who hold the majority in Congress will use this provision to continue pressuring the administration of President Barack Obama so that they can be at an advantage in the presidential elections.

Q. How should the Japanese government deal with the bilateral negotiations?

A. It is totally wrong to think that the passage of the TPA will make it easier for the U.S. government to seek compromise to facilitate the negotiations. The TPA put the U.S. government under stricter control of Congress, making it more difficult to make concessions, which means U.S. negotiators are likely to take a harsher stance. But Japan has the Diet resolutions. Japanese negotiators should not yield a single point.

Q. How will the Diet react?

A. The TPP agreement has a larger influence on the society than the security bills because it requires changes in the social system. I don’t think it will be concluded so easily, but even if it is agreed upon and is submitted to the Diet, the Diet must designate it as an important bill and establish a special committee to deliberate it carefully. When voting for the bill, lawmakers should be allowed to vote based on their own judgement, free from their parties’ policies like in the U.S. In Britain, where a parliamentary cabinet system originates from, lawmakers are allowed a free vote concerning ethical issues and international relations. The TPP talks are not the kind of issue which can be decided by political parties.