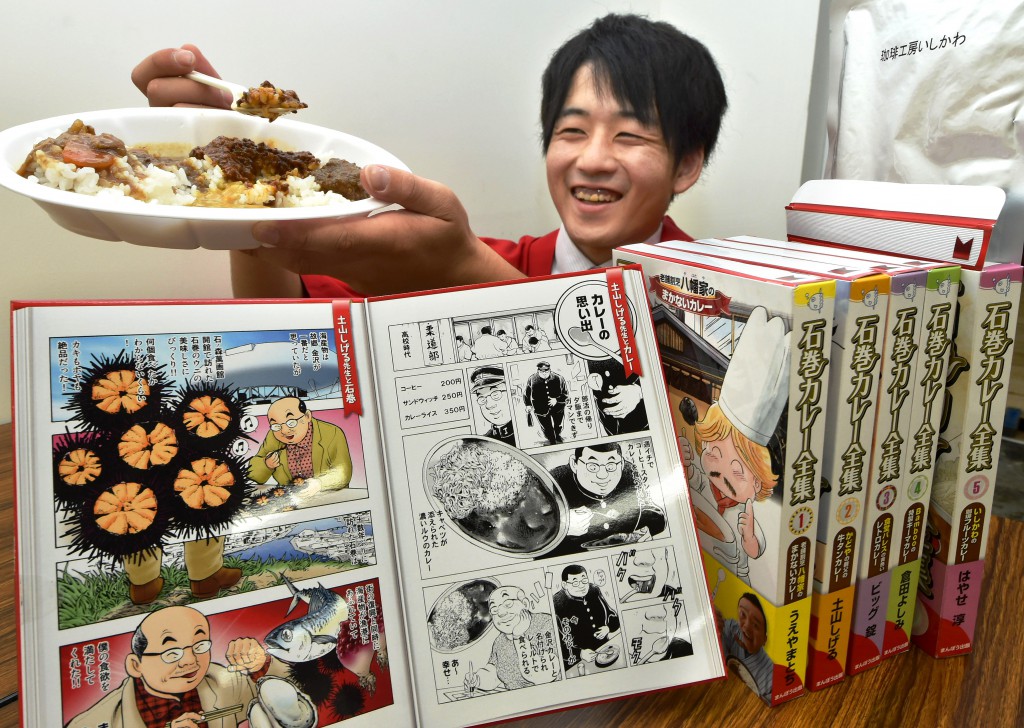 You can get curry and short comic in one package (at press release held in Ginza, Tokyo)

An operator of the Ishinomori Manga Museum in Ishinomaki-shi, Miyagi Prefecture, started to sell five kinds of pouched curries in the packages that look exactly like comic books. The curry sets named “Ishinomaki Curry Zenshu (Ishinomaki Curry Series)” will go on sale on July 19, 2015. The operator, Machizukuri Manbo, produced them in order to help restore the area that was hit by the East Japan Great Earthquake. The press release and briefing took place in Ginza, Tokyo, on June 15.

The recipes are all original and created being supervised by five local restaurants and shops including a grilled eel restaurant and a meat shop. The curries are cooked using local marine products and vegetables. The “front covers” of the package are drawn by five professional gourmet comic artists including Tochi Ueyama and Shigeru Tsuchiyama. What’s more, and most importantly, inside the boxes, you’ll find two pages of short comic stories. “It’s great that I, as a manga artist, can take part in the moves to revitalize the quake-hit area,” said Tsuchiyama smilingly.

Ishinomaki-shi has been trying to develop itself using manga as one of the local assets, by taking advantage of being the birthplace of an influential Japanese manga artist, Shotaro Ishinomori. Ishinomaki Curry Series are available at stores in the city at a price of JPY700 each excluding consumption tax. The organizer is already planning to release a sequel to the series in the near future.