How should we prevent soil degradation, which threats stable food supply? Following are interviews on two experts from China and the United States who have been raising the alarm on conservation of soil in their countries and the world.

In order to cope with the situation, the Chinese government introduced strict regulations to protect farmlands. It established a “red line” of 120 million hectares as the minimum necessary acreage to feed its people, and strengthened rules to prevent farmlands from shrinking below the line.

However, the area of farmlands dropped to 121,730,000 hectares in 2010, and some experts predict that the acreage will continue shrinking at an annual pace of a few percent. I am strongly concerned that the acreage could drop below the red line. In addition to maintaining the acreage, it is necessary to prevent productivity from declining due to soil degradation. It is important to maintain the balance of nutrient contents in soil and improve the yield per unit area.

I am now focusing on coping with alkaline soils, which are one of the factors of soil degradation, by restoring them and keeping them as “spare farmland.” Some districts have already succeeded in cultivating rice on alkaline soils. We have also succeeded in planting perennials on an Inner Mongolian desert with high alkalinity and turning it into grassland in a couple of years. It is not altogether a dream to make the spare land into farmland in the future. 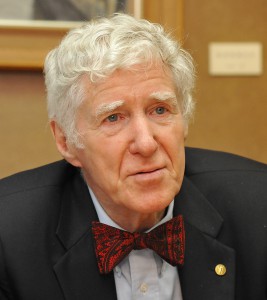 Our civilization has been supported by a few inches of topsoil. The soil which has been formed over a period of thousands of years to cover the Earth is facing a serious challenge. Forests and grassland are forcibly cleared all over the world to grow crops, and excessive pasturing of livestock has led to loss of rich topsoil.

In 1938, an official of the United States Department of Agriculture’s Soil Conservation Service, now known as the Natural Resources Conservation Service, investigated on the rise and fall of ancient civilizations overseas and discussed the remains of Aleppo in northern Syria in his report. Although parts of the ancient buildings still remain, the area is filled with rocks. People have been conserving soil and water for centuries, but the war halted their efforts and the topsoil was lost in the worst way possible. If the topsoil remained, it is possible to reconstruct the city even if it was destroyed and the population dispersed, but now that the soils are gone, all is gone, he wrote.

In the dry areas of China and former Soviet Union, topsoil is blown away in a large scale due to strong winds. If drought-stricken areas expand due to global warming, soil erosion will become even more serious.

We must learn from history and protect our topsoil. In the U.S., soil conservation efforts were strengthened by the 1985 Farm Act and damages of soil erosion were reduced as a result. If similar measures are taken all over the world, the situation will definitely improve.

This entry was posted in Food & Agriculture, Others and tagged Interviews. Bookmark the permalink.