In early October, when the hunting season begins in Scotland, “trained hunters” who are qualified as game meat inspectors bring in deer day after day to a meat processing plant of Highland Game Ltd., a game meat dealer in Dundee.

Each deer has a tag put on its belly to identify when and where it was captured, and the hunter identification number. Highland Game owner and managing director Christian Nissen stresses that the safety of the firm’s game meat is ensured by the trained hunters.

Trained hunters are those who have learned such skills as wildlife disease prevention and hygiene control of meat processing and passed the qualification test. 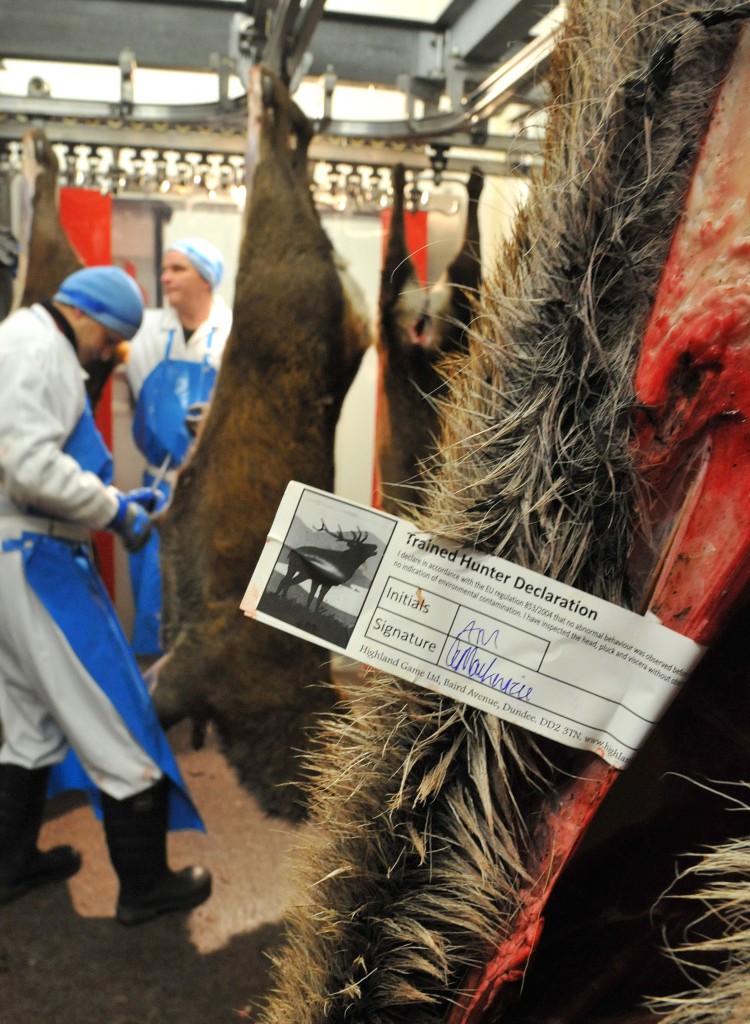 Deer meat is tagged at Highland Game Ltd. in Dundee, Scotland, to show the hunter’s ID number and where it is captured, which is required for all marketed venison.

The British Association for Hunting and Conservation’s Senior Training and Development Officer Nick Lane explains such trained hunters have the important task of ensuring safety of deer meat through the whole process from before hunting to supplying the meat to the final consumers. Lane is in charge of offering training programs for deer management qualification (DMQ), one of the certifications required for game meat inspectors.

In 2006, the European Union largely revised the safety standard regulations for food products which include game meat, and required that all products be tagged to guarantee traceability and that head and internal organs of all animals go through veterinary inspection.

Trained hunters are qualified, based on their knowledge acquired through training programs, to identify dysontogenesis and infectious diseases by themselves. Such hunters are contributing to ensuring high safety of game meat, as well as saving the time and cost of taking game animals to inspection centers, according to Lane.

Hunters qualified for DMQ level 1 amount to some 20,000, roughly 20 percent of the total deer hunters. Those who want to obtain the qualification pay 295 pounds (about JPY46,000) for a two-day training course and take a test covering meat hygiene control, legal requirements and shooting techniques.

Nissen says he is confident about the safety and quality of the meat offered by Highland Game, because it buys game meat only from trained hunters and the meat also goes through inspection by the company’s veterinarians.

Unlike in France or Germany, few British people had the custom of eating venison. Most of the venison produced in Britain had been exported, but Britain’s exports of meat products were banned after the outbreak of foot-and-mouth disease. This led the nation’s game industry to work on expanding domestic consumption along with establishing a safe and sound distribution system.

Wholesalers promoted game meat to hotels and restaurants, and asked high-profile chefs to recommend gibier dishes in television programs. Thanks to such efforts, 20 percent of the British people now regard deer meat as food, according to a survey conducted by the industry.

Highland Game also offers various ready-to-cook game meat products such as diced venison in a red wine marinade and herb sausages. The company handled 47,000 deer in 2012, six times as many as 15 years ago when it started dealing in venison.

Nissen says his policy is to promote local production for local consumption. The company’s target is 55 million British people, he says, adding that he hopes to support efforts to tackle wildlife crop damages by consuming game meat provided by nature.

This entry was posted in Food & Agriculture and tagged Series. Bookmark the permalink.