Even in France which has a long history of gibier dishes, popularity of game meat is declining especially among young people. Producers and sellers of gibier products are conducting thorough hygiene management to secure safety of game meat, and are making efforts to make it more appealing to a wide range of consumers.

Some 30 wholesalers in the gibier market sell 88,000 tons a year of game meat, including bird meat. The floor of the market is filled with processed meat vacuum-packed or packed in plastic foam trays. Philippe Stisi, 52, public relations officer of the market, says that until a decade ago, game meat used to be sold in the market without removing skin and hair, but now it is sold packed like any other meat such as beef.

The European Union revised the General Food Law in 2006 to regulate distribution of game meat. Large animal’s meat which has the risk of being infected with trichinosis – a disease which people can also get by eating raw or undercooked meat – must go through inspections at health centers before being put on sale.

The revised legislation also requires game meat dealers to meet certain traceability performance standards. Most of wild boar meat and deer meat sold at markets are packed, with identification numbers printed on the package to enable buyers to trace who hunted the animals, where they were hunted and the name of distributors. Wild birds such as partridges, pheasants and grouse are managed by lots. 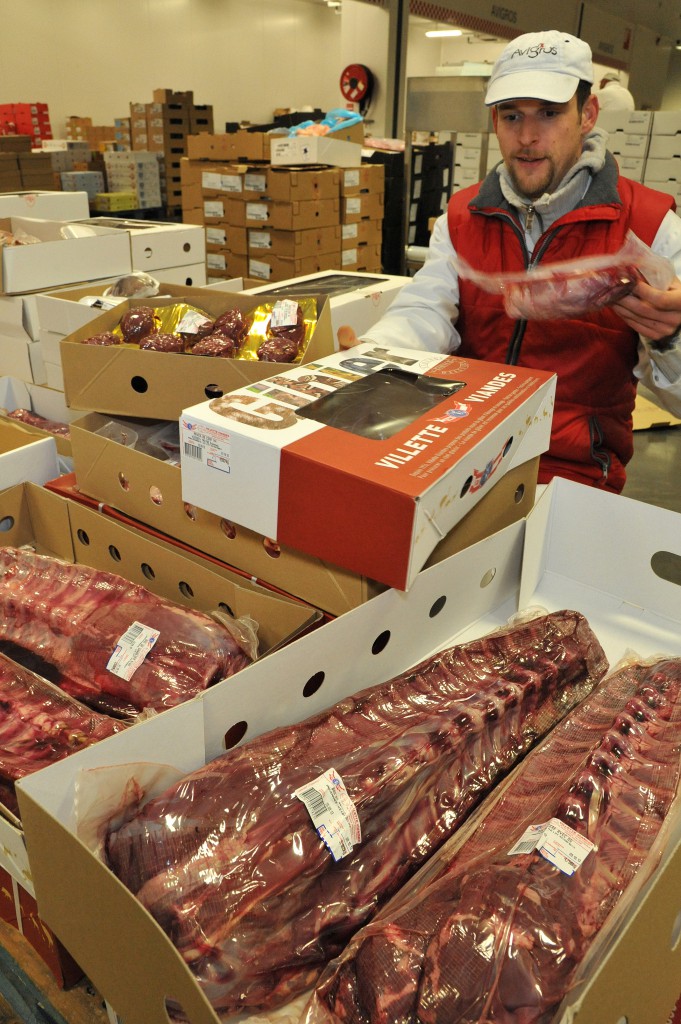 Vacuum-packed wild boar meat is sold at the gibier market in Rungis, France, an indication of improved hygiene management of game meat.

France has been offering safe game meat in line with the EU standards, but it has fallen behind other EU countries in terms of establishing inspection systems. In Great Britain, hunters gain qualification as meat inspectors to simplify the process of marketing game meat, and this resulted in the increased distribution of gibier.

Meanwhile, France does not have a meat inspector qualification system, so it takes a lot of time and money to inspect game meat one by one. One hunter from central France claims he can only gain a profit of about 1 euro (JPY130) from 1 kg of wild boar meat.

Many dealers worry that less and less people, especially the young, prefer to eat gibier, amid the popularity of a movie depicting a personified fawn and the rise of wildlife conservation movements, in addition to changes in diet. Marc Hervouet, former chairman of the association of retailers dealing with poultry and gibier, points out that opportunities to enjoy gibier dishes are clearly declining.

Sellers of gibier are trying to appeal to young people by modifying the unsophisticated image of game meat. According to Hervouet, they sell game meat in packages with pictures of beautiful forest scenery printed on them, expand the range of ready-to-eat seasoned items and promote gibier as healthy food with low fat and high protein. They also adjust the degree of bird meat maturity according to restaurants’ requests.

Thanks to their efforts, sales at the gibier market in Rungis marked a 4.6 percent year-on-year increase in 2011 and a 0.2 percent rise the following year. The data shows that consumption of game meat is recovering, although slightly, Stisi says, indicating the revival of France as a major gibier consumer.