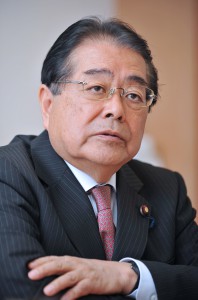 Q. How will the ruling bloc proceed with the new agricultural reform?

A. We need a new legislation in order to stabilize the system, but farmers’ recognition of the new policies is not yet sufficient. We should first have thorough discussion at the Diet and spread the idea among those concerned. Although we do not plan to change the overall direction of reform, there are things that we do not realize until we actually put it into practice. If there is any problem, we can revise the law even after it takes effect. It is important to reflect the voices of farmers in policymaking.

Q. Some farmers are worried about the revision in rice production adjustment policies.

A. The government aims to abolish the system of allocating rice production targets and will only offer information to farmers starting in fiscal 2018.  But there is a question of whether the government can bear the responsibility of ensuring food security only by asking individual farmers to make judgments at their own risk. We will monitor the outcome of the new policy starting this year, using objective data.

We are strongly calling for the need to introduce compensation measures such as income insurance, if we are to relax control on rice production in fiscal 2018.

A. It is necessary for rice farmers to overcome the idea that they want to continue making rice consumed as staple food. We also have to establish more paddy dryer plants and encourage livestock breeders to buy rice for feed. We will take such measures starting in fiscal 2014 so that farmers can produce rice for livestock feed without any worries.

Q. How do you think the government should cope with negotiations under the Trans-Pacific Partnership free-trade talks?

A. The government is deeply concerned over the talks, because if the TPP member countries fail to reach agreement in the ministerial meeting scheduled in February, the negotiations will come to a deadlock. The government maintains its stance of protecting the five key agricultural products no matter what. We only hope negotiators will make utmost efforts to keep the resolutions adopted by the committees of the Diet. Unless the government respects the will of the legislative body, we cannot unconditionally approve the ratification of the agreement.

Information disclosure concerning the TPP negotiations remains insufficient. We need to have thorough debate in the agricultural committees of the Diet and let the Japanese people get information.

Q. How should the basic plan for food, agriculture and rural areas be reviewed?

A. We do not need to change the goal of obtaining 50 percent food self-sufficiency rate by fiscal 2020. In order to raise the nation’s self-sufficiency rate, all of us, including consumers, should discuss measures such as increasing production of rice for livestock feed, reducing leftovers and selecting domestically-grown food products. We must also take into consideration the idea of food supply capability, which includes food production capacity in case of emergency.