2014 will be the year when a series of agricultural reform, including the establishment of a Japanese-style direct payment system and the revision of individual-household income compensation, will be implemented by the government t and the ruling Liberal Democratic Party.

The government is also faced with various other issues, such as negotiations under the Trans-Pacific Partnership free-trade talks intensifying before spring, and debates starting on the creation of a new basic plan for food, agriculture and rural areas.

Along with the opening of the ordinary session of the Diet, The Japan Agricultural News interviewed seven political parties’ lawmakers in charge of agricultural issues, who are preparing to start policy discussions at the agricultural committees of the upper and lower houses of the Diet. 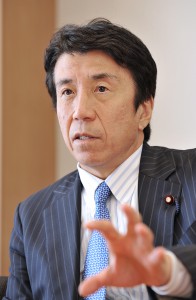 Q. What are your predictions for this year?

A. I think this year will be an important year to rebuild the agriculture industry which is standing at a turning point. New policies by the LDP, such as the rice policy, will start, and it is vital for us to implement the policies by sharing their intentions not only with farmers but also with consumers. LDP lawmakers and officials of the Ministry of Agriculture, Forestry and Fisheries will visit people to explain the policies, and we are asking the Japan Agriculture Cooperatives to cooperate.

Q. Farmers are concerned over the new policies.

A. We will listen to the farmers’ opinions and review our policies if necessary. But before criticizing our policies, we want them to understand the background and get a full picture of today’s agriculture. As the population is declining and demand for rice consumed as staple food is expected to decrease further in the future, the current system of rice production adjustment will fail to work if it remains as it is now. If the allocations for rice production volume targets become smaller year by year, the system will stop functioning sooner or later. It is inevitable to revise the system before it is too late. On the other hand, it is necessary to maintain rice paddies so that future generations will not starve in case of emergency. Considering these circumstances, the only solution would be to fully utilize existing rice paddies by offering subsidies to ensure the same income level as producing rice consumed as staple food and encouraging farmers to change to other crops, including wheat, soybeans and rice for livestock feed. It may be difficult to change immediately, but there is no other way. Problems remain concerning sales and distribution of rice for livestock feed, but we will have to cope with them as we go on.

People tend to focus on the fact that the unit price of fixed direct payment to rice farmers will be halved in fiscal 2014, but the agricultural ministry’s budget for the fiscal year will actually increase. We will implement policies in line with the government’s 10-year strategy to double incomes of farmers and rural villages, including establishment of Japanese-style direct payment system, setting up of farmland consolidation banks to improve productivity, discussing creation of income insurance to cope with possible drop in rice prices and supporting farmers’ efforts to enter food processing and sales business.

Q. In the TPP talks, the United States is demanding Japan to eliminate tariffs on all goods, including key agricultural products.

A. Depending on the U.S. moves, the TPP negotiations could make a big progress and reach a crucial point for an agreement. But we will never negotiate without keeping the LDP campaign pledge and the resolutions made by the Diet committees which state that tariffs on the key agricultural products should be maintained. We should never be allowed to go even a step away from them.

Amid frequent occurrences of climate changes brought about by global warming, no one can predict what will happen to the world’s food security. We must protect the key agricultural products not only for the sake of farmers but also for the sake of ensuring the nation’s food security. The most important role of politics is not to let people starve.

Q. Farmers are worried over debates for drastic agricultural reform which are going on in the government’s Industrial Competitiveness Council and Regulatory Reform Council.

A. It is alright for them to share our intentions for agricultural reform and think about what we should do to realize it. But we do not have to take part in discussions which blame JAs or the agricultural affairs committees from the beginning.