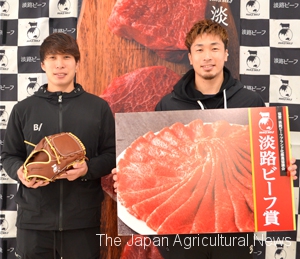 The Hyogo-based Japanese baseball team captured its first pennant in a quarter-century last year. To celebrate the victory, two local entities, the Awaji Beef Branding Promotion Council and the Awaji Island Leather Council, decided to present the gloves to two Awaji native players of the Buffaloes.

Last year, nine groups on Awaji Island, including the Awaji Beef Branding Promotion Council and leather item producers, established the Awaji Island Leather Council to boost the value of not only Awaji wagyu beef but also cattle hide. The council is trying to promote the local cowhide brand to revitalize its demand, which keeps dropping because of the pandemic. The presentation of the gloves is expected to make the name of Awaji Island Leather better known by the public.

On January 14, presenters from the council, including cattle growers, visited Ryota Muranisih and Ryoichi Adachi, who were back in Awaji City doing voluntary workouts. They presented a letter of appreciation, the gloves, and Awaji-brand beef to the players.

Nishimura, an Awaji native, said, “The gloves are so soft and stylish. I want to do well to uplift the hearts of the islanders and to contribute to the team.”